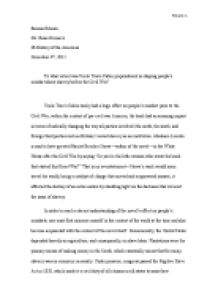 To what extent was Uncle Tom's Cabin preponderant in shaping people's mindset about slavery before the Civil War?

﻿Ribeiro 1 Brenno Ribeiro Mr. Brian Horneck IB History of the Americas December 4th, 2012 To what extent was Uncle Tom's Cabin preponderant in shaping people's mindset about slavery before the Civil War? Uncle Tom?s Cabin surely had a huge effect on people?s mindset prior to the Civil War; within the context of pre-civil war America, the book had an amazing impact in terms of radically changing the way all parties involved (the north, the south, and foreign third parties such as Britain) viewed slavery as an institution. Abraham Lincoln is said to have greeted Harriet Beecher Stowe?author of the novel?in the White House after the Civil War by saying ?So you?re the little woman who wrote the book that started this Great War?? That is no overstatement?Stowe?s work would soon travel the world, being a catalyst of change that moved and empowered masses; it affected the destiny of an entire nation by shedding light on the darkness that covered the issue of slavery. In order to reach a decent understanding of the novel?s effect on people?s mindsets, one must first immerse oneself in the context of the world at the time and also become acquainted with the content of the novel itself. Economically, the United States depended heavily on agriculture, and consequently, on slave labor. ...read more.

Last but not least, there is Uncle Tom?a generous and docile man, who gets increasingly more abuse from his owners as he is sold further and further South, eventually becoming subject to the cruelty of the very Simon Legree who had ownership of Cassie. Eventually, after severe physical and emotional torture and mistreatment, Legree orders Tom to be beaten to death by his subordinates?all three accounts are quite graphical and truly gruesome (Stowe, Harriet Beecher). These intertwined stories were eventually published in 1852 under the name of ?Uncle Tom?s Cabin; Or, Life Among the Lowly?; it was primarily geared towards opening the eyes of ignorant people all around the United States and the world to what the institution of slavery actually meant. As a matter of fact, Stowe claims to have softened much of the content so as to keep it from becoming offensive to the reader, which would make sense considering the scope of the work. The novel also guaranteed more cooperation from the Southerners because it actually didn?t demonize the South?as a matter of fact, Stowe had the characters Emily Shelby and St. Clare (Southerners in the book) speak against slavery. In a soft but effective manner, Stowe planted a seed of hope in the South?appealing to them was something that few radical abolitionists were able to do; the easily dismissible nature of regular radical speech against slavery had plagued the struggle to eradicate slavery, and Stowe?s novel was a landmark in overcoming that obstacle. ...read more.

Had Great Britain?s people not become conscious of the issue, foreign intervention could?ve turned the tides of the war in favor of the South (although admittedly internal pressure wasn?t the only reason for the neutral stance of Great Britain, it was certainly a huge contributing factor). Amongst the supposed words of Abraham Lincoln, the sheer number of copies sold, and the words of Stowe herself, it is impossible to deny the effect of ?Uncle Tom?s Cabin? as a preponderant force in shaping the mindsets of people in relation to slavery prior to the Civil War. After strong statements from the government in form of the Fugitive Slave Act and the Dred Scott Supreme Court decision, someone had to speak up in order to stir the abolitionist movement. Motivation and emotional empathy needed to be plentiful in a time of huge adversity, and that?s exactly what Stowe managed to transmit through her novel. The practical implications of the release of the novel?ranging from the actual figure of millions of copies sold worldwide in a time of illiterate masses, to the neutrality of England, not to mention the intangible but assuredly existent aspect of a change in the attitude of both Northerners and Southerners alike towards slavery?are a testament to the sheer power of this tiny lady who changed the world. ...read more.