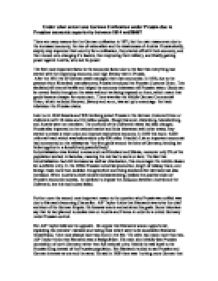 Under what extent was German Unification under Prussia due to Prussian economic superiority between 1814 and1866?

Under what extent was German Unification under Prussia due to Prussian economic superiority between 1814 and1866? There are many reasons fort he German unification in 1871, but the main reasons are due to the increased economy, the rise of nationalism and the weaknesses of Austria. Prussia slowly, step by step improved their country for a unification, they started off with their economy, and then moved onto changing it's leaders, then improving their military, and finally gaining power against Austria, who lost its power. The first most important factor is the economic factor due to the fact that everything had started with the improving economy, and high literacy rate in Prussia. After the 1815 the 39 German states managed their own economies. In 1818, due to the pressure from Rhineland manufacturers, Prussia introduced the Prussian Customs Union. This abolished all internal tariffs and helped the economy inbetween all Prussian states. Goods can be moved freely throughout the states without tax being imposed on them, which meant that goods became cheaper for consumers.. There was also the Middle German Commercial Union, which included Hanover, Saxony and so on, was set up to encourage the trade inbetween the Prussian states. ...read more.

Which was one of his most famous speeches. Although in those days people hadn't really thought of a German Unification so therefore nationaism had played little role in the unification process. However, the middle-classes were active and books and newspapers supported the idea of national unity. The German culture such as art, music, literature and history had improved and people were more aware of it. Prussia was a second-rate power in 1862 helped Bismarck in with his future ideas for the unity. Austria was also isolated diplomatically which helped Bismarck alot, and the unification of Germany. Since Russia had not forgiven Austria for not helping with the Crimean War, due to their agreement they should have, and so did Britain and France feel the same about Austria, so their sympathy lay with Prussia moreover. Britain on the otherhand thought that Prussia could be an ally force to go against French or Russian expansion. The third and last main reason why German was able to be unified was due to the weaknesses of Austria. During the 1820' Austria was a major power and had a clear access to Prussian laws and security, in the 1920's Metternich was able to impose laws such as the Karlsbad Decrees, and ...read more.

So Austria asked for peace, and Prussia was ready to give its terms. Finally, Schleswig and Holstein annexed as well as Hesse-Cassel, Hannover, Nassau and Frankfurt. Austria let Italy annex with Venetia, under the Treaty of Prague where Prussia had gained two thirds of all Prussian dominated North German Confederation, excluding Austria Finally to conclude, I believe that the three main reasons were, the economic improvement, due to Bismarck and finally due to the weakness of Austria that Germany was able to unite. But the main reason why, is because everything had started with the improvement of literacy rate, culture and economic development, and the culture and literacy rate, and people working at better jobs and becoming more educated. All of this had led to the improving economy and different ideaologies, liberal and conservatives, as well as freedom fighter. Which bought Bismarck into the scenario, who wanted to fight for its own union, even though he's seen as a Realpolitiker, he did manage to unify Germany, and without Germany's improved military and economy, and it's supreme power Austria would never have weakened. It is due to Bismarck's foreign policy and his good terms with countries such as Russia which brought the German Unification to power. ...read more.