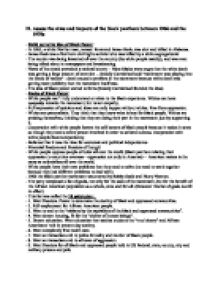 21. Assess the aims and impacts of the black panthers between 1966 and the 1970s - Build up to the idea of Black Power: - In 1965, a white Norther man, named Reverend James Reeb, was shot and killed in Alabama. - James Reeb was a Northern civil rights activist who was killed by a white segregationist - The murder was being lamented all over the country (by white people mainly), and was even being talked about in newspapers and broadcasting - News of the attack provoked a national outcry -- Most blacks were angry that the white death was getting a large amount of attention -- Stokely Carmichael said "movement was playing into the hands of r****m" --death caused a problem in the movement because white death was getting more publicity than the movement itself was. - The idea of black power started to form (Stokely Carmichael founded the idea) - Basics of Black Power: - White people can't truly understand or relate to the black experience. Whites can have sympathy towards the movement, but never empathy. - Full expression of opinions and ideas can only happen without whites. Free from oppression. - Whites are paternalistic. They think that they know what is best for black people. Whites are praising themselves, thinking that they are doing their part in the movement just by supporting it. ...read more.

19. In what ways did the foreign policy of the United States change during the Eisenhower administration? - Eisenhower was elected on the idea that he would do a better job with the cold war. - When elected, Eisenhower had to question how he would go about winning the cold war without military expansion. - Eisenhower turned to the CIA / Development of nuclear weaponry / Brinkmanship. WHAT THE CIA DID: - had foreign leaders on its payroll --> foreign leaders would make policies that were beneficial to the USA. - Financially supporting anti-communist labor unions, newspapers and political parties overseas. - Hired US journalists and academics to make contact with foreign student leaders. - Co-opt business executives who worked overseas to report back on economic circumstances and vulnerabilities. - American propaganda through use of radio and newspapers overseas. - training foreign military officers in counterrevolutionary methods. - conducted covert operations to overthrow regimes hostile to the United States. CIA IN GUATEMALA (under Eisenhower): - shift in US foreign policy --> using the CIA more - In 1950 Jacabo Arbenz was elected president, with communist allies. - Arbenz sought to modernize Guatemalan society. - Monolithic Communism --> Communism always coming from Russia. - Arbenz's nationalization --> government was going to take the land over but pay the US what the land was worth. (United Fruit didn't want to give up land --> they lost money when Arbenz nationalized. ...read more.

- The battle of Gettysburg would decide whether or not France and Britain would intervene in the war, and help the South. - During the battle, both sides lost thousands of soldiers, with the South losing nearly ? of their men. - It was clear by the outcome of the war (with the South with more casualties and deaths) that France and Britain would not intervene in the war. - The Southern morale plummeted. - The battle of Gettysburg determined that the South had slim chances of winning the war because of their drop in morale and loss of soldiers. Also because Britain and France wouldn't support them, mainly because they weren't convinced that the South could actually win the war. - Because of the lack of faith from overseas in the South, it was essentially determined that the South would not win the war. - The South appears wear during and after the battle. After the battle the South retreats back to Virginia with the plans to hold a Confederate victory on Northern soil defeated. - The Northern victory at Gettysburg was also significant in giving Abraham Lincoln the power and confidence that would help him in forming his plan of Total War. - Total war was the idea that all parts of the country would contribute to the war. - The idea of total war was recognized by the Union as an effort to completely destroy the South. The purpose of this tactic was to eliminate food and supplies that were vital to Southern soldiers -- and to decrease Southern Morale. ...read more.