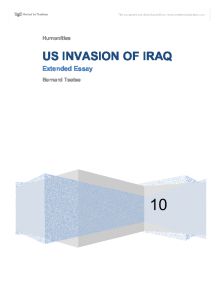 Bernard Tsetse Based on the past relationship between the two governments, was the US invasion of Iraq in 2003 a fight against terror, a search for weapons of mass destructions or due to a hidden agenda? The US invasion of Iraq in 2003 has been a very controversial event in the past few years both in the US and in the rest of the world. The invasion commenced the US and other nations initiating an attack on Iraq on March 1, 2003. Skeptics believe that the invasion of Iraq was due to a hidden agenda. The objective of this extended essay is to find out the main reason for US invading Iraq. My research uncovered four main reasons: Terrorism, Weapons of mass destructions and oil interest and to liberate Iraqis from Saddam's dictatorship. The objective of this extended essay is to find out which reason was the primary reason for the US invading Iraq. 2.1 Fighting terrorism is one the most logical reason that the public believed for US invading Iraq. This is because the Invasion took place after the terrorist attack in U.S. land. The U.S. suspected Iraq because it had previously attempted on plan a terrorist attack on U.S. targets in the Gulf. After the attack, the Bush administration proposed to the public its reasons of planning to attack Iraq. ...read more.

US strive for oil was because oil played an important role in US's or any other countries' economic growth. With oil, US will gain economic, political and military supremacy of the world, a goal which it has been trying to achieve since World War II. (9, 12) Compared to the other reasons, much has been said about US invasion of Iraq was due its oil interest but the government did not admit it at the time. However, Alan Greenspan the chairman of the Federal Reserve of the US writes in (The Age of Turbulence: Adventures in a New World) in September 17, 2007 "I am saddened that it is politically inconvenient to acknowledge that everyone knows: the Iraq war is largely about oil." This clearly shows a different position at the time of the invasion. 2.4 Another reason for US invading Iraq was to end the dictatorship of Saddam Hussein thus liberating the Iraqi people from his tyranny. Saddam was a despot who exploited Iraq for more than thirty years, causing devastating regional wars. Throughout his reign over Iraq, blood purges with the ranks of the Baath Party was not settled and imprisoned political members to diffuse any threat against his regime. One of his brutal acts he committed during his life was the killing of 5,000 and wounding of 10,000 of his own citizens in 1988 that were suspected of being disloyal, by the means of gas poisoning. ...read more.

The only way such relationship between Osama and Saddam was formed might have been the mutual characteristics they both shared. The other claim which was that Iraq possessed WMD was also not justified. During the war, many months were dedicated to WMD investigations, but no stockpiles of biological, chemical or nuclear weapons were found. This led to no proof of an active WMD programs. The only reason which was justified was the liberation of the Iraqis from Saddam's tyranny. The people of Iraq were living in misery when Saddam was in power and some Iraqi parties asked the US to help overthrow Saddam. After all the unjustified reasons for US going to invading Iraq, the invasion can be considered as a war with a hidden and the hidden agenda being US wanting to regain what it had lost during the gulf war, which in turns was oil in Iraq. There is increasing belief that this war was totally unnecessary. The terrorism issue together with the case of weapons of mass destruction being used for no apparent reason could have been dealt wisely with. There are still many unanswered questions about the US invasion of Iraq. It will be interesting if future research could be conducted to find out why US made itself easily vulnerable to a terrorist attack, despite all of its high tech technology. ?? ?? ?? ?? 2 ...read more.