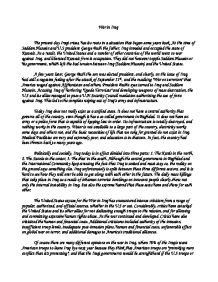 War in Iraq The present day Iraqi crises, has its roots in a situation that began some years back. At the time of Saddam Hussein and U.S president George Bush the father, Iraq invaded and occupied the state of Kuwait. As a result, the United States and a number of other countries of the world went to war against Iraq, and liberated Kuwait from it occupation. They did not however topple Saddam Hussein or his government, which left the bad tension between Iraq (Saddam Hussein) and the United States. A few years later, George Bush the son was elected president, and clearly, on the issue of Iraq, had still a negative feeling after the attack of September 11th, and the resulting "War on terrorism" that America waged against Afghanistan and others, President Bush's eyes turned to Iraq and Saddam Hussein. ...read more.

Water is not available to a large part of the country, electricity works some days and others not, and the basic necessities of life that we take for granted do not exist in Iraq. Medical Facilities are very and extremely poor, and education is in shatters. In fact, the country had been thrown back to many years ago. Politically and socially, Iraq today is in effect divided into three parts: 1. The Kurds in the north, 2. The Sunnis in the center, 3. The shia' in the south. Although the central government in Baghdad and the International Community keep stressing the fact that Iraq is united and must stay so, the reality on the ground says something else. ...read more.

Of course there are many different opinions on the war in Iraq, where 70% of the Iraqis want American troops to leave Iraq bye next year because they think that American troops are "provoking more conflict than it's preventing", and that the Iraqi governmernt would be strenghthend if the U.S troops or forces left Iraq. Later on, a survey proved that that most Iraqi people believe that the presence of U.S. forces is making things worse, and that most of the population consider attacks on coalition forces "acceptable". In addition to that, U.S forces in Iraq think that the U.S. should exit the country within a year, and around 25 countries dissaprove of the U,S handling towards the War in Iraq. ...read more.