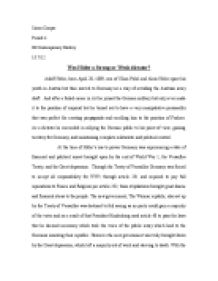 Was Hitler a Strong or Weak dictator?

﻿Sierra Cooper Period 4 IB Contemporary History 1/17/12 Was Hitler a Strong or Weak dictator? Adolf Hitler, born April 20, 1889, son of Klara Polzl and Alois Hitler spent his youth in Austria but then moved to Germany as a way of avoiding the Austrian army draft. And after a failed career in Art he joined the German military but only ever made it to the position of corporal but he turned out to have a very manipulative personality that was perfect for creating propaganda and excelling him to the position of Fuehrer. As a dictator he succeeded in rallying the German public to his point of view, gaining territory for Germany, and maintaining complete militaristic and political control. At the time of Hitler?s rise to power Germany was experiencing a state of financial and political unrest brought upon by the end of World War 1, the Versailles Treaty, and the Great depression. ...read more.

With the people infuriated and starving it was a perfect opportunity for Hitler to gain power. He gave work to starving veterans, provided them with a common enemy to blame their current situation on, the Jews and outcasts, and offered Germany hope. He gained the peoples trust and devotion and maintained it by fulfilling his promises of German territorial advancement. Hitler policy of Lebensraum called for food and living space for the excess of the German population, which meant that territory must be gained at all costs. However, the cost of these desired lands was not high. The Great Powers trying to avoid another World War followed the path of appeasement and granted Hitler his every wish. He started by demilitarizing the Reinland of all French and Belgian troops, and eventually taking the land in the name of Germany. ...read more.

First he set fire to the Reichstag building then blamed it on the communists, which lead to the ?ordinances for the Protection of the German state and Nations? this kept any Nazi opposition from getting their press out to the public and allowed the Nazi party to take the majority of the vote. He then had the Enabling Act passed which allowed his cabinet to pass all the laws for the nation for four years without the consent of the Reichstag. He then insured his power by outlawing all other political parties and created the Gestapo, or secret police to keep them suppressed. In the process of becoming a strong dictator, Hitler gained the publics trust and united them behind himself and his party, initiated his policy of Lebensraum, and suppressed all other militaristic and political opposition. Though Hitler showed some weakness in military knowhow he made up for it with his charismatic personality and indisputable declarations. ...read more.