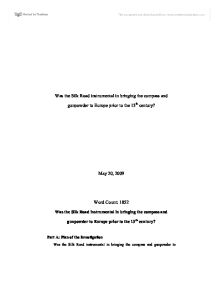 Was the Silk Road instrumental in bringing the compass and gunpowder to Europe prior to the 13th century?

However, the author's argument is sometimes one-sided, and can be somewhat biased. The book does not seem to fully examine and explore the arguments of the opposite position. Part D: Analysis During the 12th century, the lands north and east of India were unknown to European voyagers. The Silk Road was the only route that made the transporting of goods and technology possible between Europe and China. Historians have differing opinions and theories regarding how the compass and gunpowder may or may not have been transported along the Silk Road. Some historians believe that it was impossible for the compass to get to Europe before the 12th century. They argue that the Muslim's closure of all the land and sea routes of the Silk Road to China from the West prevented the transportation of any technologies, products, and ideas to happen (The Riddle of the Compass: The Invention That Changed the World by Amir D. Aczel, page 112). Subsequently, during the series of Crusades, Christians invaded the Muslim Nations, separating the East and the West even more (The Crusades by Paul Halsall). During this chaotic period, it was nearly impossible for long distance trading from China to Europe to continue. ...read more.

Aczel, page 112). The series of Crusades between the two nations could have introduced the Europeans to gunpowder. When the Mongolians were invading the West in the 1200s, they used gunpowder and other eastern weapons unknown in the West. After the Mongolians conquered the land, merchants, missionaries and adventurers were drawn to the Mongolian territory. Gunpowder must have been brought to Europe by these travelers. The evidence shows that it is most likely that gunpowder was transported along the Silk Road to the Arabs or Mongolians, and the Europeans acquired the technology from one of these two nations. Part E: Conclusion Many theories have been suggested regarding how the Europeans gained knowledge of the compass and gunpowder. Some have more conclusive evidence than others. Upon investigation, little evidence supports the theory of Europeans inventing the compass and gunpowder independently. Other theories all involve the Silk Road as a major and indispensable route for the two world changing inventions to reach Europe. Despite the controversy, the Silk Road was pivotal to the transportation of these two technologies. Without its routes, transportation of ideas, products and technologies could not have happened between the East and the West during the 12th and 13th centuries. ...read more.