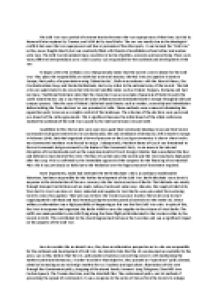 What was responsible for the start of the Cold War?

﻿The Cold War was a period of extreme tension between the two superpowers of that time: USA led by Roosevelt later replaced by Truman, and USSR led by Josef Stalin. The war was mostly due to the ideological conflicts between the two superpowers and fear or paranoia of the other party. It was termed the ?Cold War? as they never fought directly but was constantly filled with threats of annihilation of each other and nuclear arms race. The Cold War devastated many countries in terms of politics, economy and social living. There were many different interpretations as to which country was responsible for the outbreak and development of the war. To begin with is the orthodox view that generally states that the Soviets were to blame for the Cold War. They place the responsibility on USSR due to several reasons; the Red Army Occupation in Eastern Europe, their policy of expansionism using ?Salami tactics?, Stalin in accordance with the Marxist theory, the Czechoslovakian Coup, and the Berlin Blockade. Red Army refers to the national army of the Soviets. The Red Army occupied states to be converted into Soviet Satellite states such as Poland, Hungary, Romania and East Germany. ...read more.

Berlin Blockade was a Soviet?s response to the introduction of the new currency into the Western sectors of Berlin. The blockade was mainly through transport restrictions such as roads, railway tracks and waterways. Likewise, the supply of electricity from East to West was also cut. Food, materials and supplies to West Berlin were prevented from entering Soviet?s zone of occupation. Their aim was to force the Western powers to allow the Soviet zone to start supplying Berlin with food and fuel, thereby giving the Soviets practical control over the entire city. Direct military confrontation was a high possibility of happening as this was the first Cold War crisis. In spite of this, the West in response had organized the Berlin Airlift to carry the supplies to the citizens of West Berlin. The airlift was made possible by aircrafts flying along the three flight paths allocated to the Western Allies by the Soviets in 1945. This contributed to the clear disagreement between the two sides and was a significant impact on the progress of the Cold War. Now to consider the revisionist view, they have an alternative perspective as to who was responsible for the outbreak and development of Cold War. ...read more.

On top of this were the Truman Doctrine and the Marshall Plan which was a radical change in policy of the US, far from being isolationist. It was Truman?s response to unstable conditions in Turkey and Greece to support them from subjugation. To the USSR, it was an evidence of US desire to expand their sphere of influence. To put it more simply, it was an ideological shield to rebuild the Western political and economic system and counter the radical left, the Soviets. The Marshall Plan was an economic extension of the Truman Doctrine. Soviets felt that this was the US way of Dollar Imperialism by establishing a European empire. On the whole, the responsibility on the outbreak and development of the Cold War was mostly a traditional balance of power conflict based on the balance of the arguments. The growing tension between the two superpowers was a result of both sides improving their course of action impulsively rather than thinking it through practically. For example, after the Red Army occupation, the Telegram, the Iron Curtain Speech, Truman Doctrine, The Marshall Plan, The Czech Coup and The Berlin Blockade. It was more of a pattern of ?action and reaction? between the two countries that triggered the Cold War. ...read more.