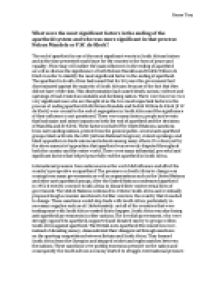 What were the most significant factors in the ending of the apartheid system and who was more significant in that process: Nelson Mandela or F.W. de Klerk?

﻿Renee Terz What were the most significant factors in the ending of the apartheid system and who was more significant in that process: Nelson Mandela or F.W. de Klerk? The end of apartheid is one of the most significant events in South African history and at the time presented much hope for the country in the form of peace and equality. This essay will outline the main influences in the ending of apartheid as well as discuss the significance of both Nelson Mandela and Fedrik Willem de Klerk in order to identify the most significant factor in the ending of apartheid. The apartheid in South Africa had meant that for 50 years the government had discriminated against the majority of South Africans because of the fact that they did not have white skin. This discrimination had caused death, racism, violence and uprisings. It had created an unstable and declining nation. There were however, two very significant men who are thought of as the two most important factors in the process of ending apartheid. Both Nelson Mandela and Fedrik Willem de Klerk (F W de Klerk) were crucial to the end of segregation in South Africa and the significance of their influence is not questioned. ...read more.

These three men as well as many other activists inspired the black communities to take a stand against the biased laws. They inspired and motivated protests such as the Soweto riots, the Vaal Triangle uprising, the Sharpeville Massacre and many other demonstrations. These protests raised enough awareness of the cause that the South African government realised people were prepared to question the law and order of the nation. Unfortunately, most of these uprisings ended with hundreds dead and thousands more injured. Black activists and anti-apartheid groups such as the ANC were very much a significant part in the changes in South Africa leading to the end of apartheid. Nelson Mandela was the most influential black activists in South Africa and worked for many years in order to fight the government and the rules of apartheid. In the earlier years of apartheid, Mandela led black protests in order to raise awareness of the unfair and unjust rules that were governing the country. He increased his anti-apartheid efforts when he joined the ANC and realised that peaceful protests were not working as effectively as they had hoped. In 1960, Mandela proposed to the ANC that they set up a military wing to organise more noticeable acts of protest. ...read more.

His position had allowed him to take advantage of the existing pressure and need for change to ensure a peaceful transition out of apartheid. As president of South Africa, he managed to make drastic changes to the governing of a torn country, gained respect for working towards equal rights for all South Africans and allowed the nation to move forward in terms of law enforcement and economy. F.W. de Klerk was hugely significant in the ending of unfair discrimination and in the establishment of a new, multiracial, united South Africa. Although Fedrik Willem de Klerk was extremely valuable and important, Nelson Mandela was more significant to the ending of apartheid in South Africa for a number of reasons. His impact on the process of ending apartheid was more significant in that it lasted for longer, affected more people and is still considered a representation of the struggle in South Africa. More so than de Klerk, he is recognised today as the single symbol of resistance. He affected people on an emotional scale and initiated the change of attitude within South Africa. His determination, passion and courage were crucial to his significance. As well as F.W. de Klerk and Nelson Mandela there were many beneficial influences in gaining momentum for the anti-apartheid cause. However, although there were many factors that contributed to the ending of apartheid, Nelson Mandela was the most significant. ...read more.