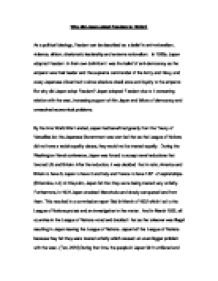 As a political ideology, Fascism can be described as a belief in anti-rationalism, violence, elitism, charismatic leadership and extreme nationalism. In 1930s, Japan adopted Fascism. In their own definition it was the belief of anti-democracy as the emperor was their leader and the supreme commander of the Army and Navy, and every Japanese citizen had to show absolute obedience and loyalty to the emperor. But why did Japan adopt Fascism? Japan adopted Fascism due to it worsening relation with the west, increasing support within Japan and failure of democracy and unresolved economical problems.

By the time World War I ended, Japan had benefitted greatly from the Treaty of Versailles but the Japanese Government was worried that as the League of Nations did not have a racial equality clause, they would not be treated equally. During the Washington Naval conference, Japan was forced to accept naval reductions that favored US and Britain. After the reduction, it was decided that in ratio, America and Britain to have 5, Japan to have 3 and Italy and France to have 1.67 of capital ships. (Britannica, n.d) At this point, Japan felt that they were being treated very unfairly. Furthermore, in 1931 Japan attacked Manchuria and slowly conquered land from them. This resulted in a commission report filed in March of 1932 which led to the League of Nations protest and an investigation in the matter. And in March 1932, all countries in the League of Nations voted and decided that as the takeover was illegal resulting in Japan leaving the League of Nations. Japan left the League of Nations because they felt they were treated unfairly which caused an even bigger problem with the west. (Tan, 2010)During that time, the people in Japan felt humiliated and insulted by the League of Nations, so when the government decided to resign from the league of nation, the people felt that they have regain their some of their pride in some way thus supporting fascism.

Within Japan, the people accepted Fascism as a better system as it supported anti-imperialism. (Shuter& Kelly, 2007)  The Fascist believed that western values dominated the world and their ways were morally wrong. They saw the policy of keeping peace with the west as weak and did not want Japan to be dependent in the west for raw materials. As they believed in nationalism, they wanted Japan self sufficient by trading and be a strong nation and using propaganda they try and convinced the Japanese people that western ways were wrong. This help them to a certain extent as some people truly believe and were convince by them but one other way Fascism became more powerful in Japan is in the education system.  In the 1850s, half the men and a seventh of the women in Japan were literate and by 1920s, farmers could read and write. (Tan, 2010)Along with the education focus on nationalism, self sacrifice and loyalty to the emperor, fascism was becoming more and more popular as they promoted a way which they called the way Japanese people should live their life. ( Shuter &Kelly,2007) This made the people in Japan happy as they too benefitted from this system which leads to the rise of fascism.

In 1920s, workers had poor living conditions. They had to work more than 10 hours a day in crowded, unhygienic conditions which caused them to go on strike in 1921. (Tan, 2010)They felt that the government did not care about them and joined groups such as the militarist which gave them more attractive ideas which please them.

From 1868, the Japan had been governed by an emperor and parliament but the government which very inefficient as it had limited power. The government had no real power as the power was controlled by the emperor and Genro. This restricted the power the government had as they soul question ministers’ policies and decisions but not make decision of polices or control the ministers. They could discuss about national issues by the real power belong in the military which they had no control over. They had no control over the National budget which ended up largely in the military’s fund. This made the government look weak and by then influential group started emerging promising more attractive ideas like nationalism which lead people to follow them instead of the government. (Tan, 2010)

In the 1920s, Japan was facing many unresolved economic problems. In the 1920s, nearly half the farmers had less than one and a quarter acres of land left.  Without enough land, they could not grow more rice, and they were not able to make enough profit. This caused the price of rice to fall by 50%, which virtually bankrupted the farmers. Later in 1932, a drought worsened their situation which leads them to joining the army which gave them a stable salary. Another unresolved economic problem is the great depression in 1929, caused prices the drop by 780% which caused am economic depression in Japan. This lead to people’s lost in faith in the government and caused them to start listening to more attractive ideas such as military strength. (Tan, 2010)

In conclusion, I think that Japan adopted Fascism mainly because of failure of democracy. Without a string government, the people of Japan lost faith in the government which caused them to support other groups with more attractive idea such as militarism. The government weak leadership failed to resolve economical problems within the country and also failed to see the how its choices disappointed their people while other groups promoted more attractive ideas that people supported. Therefore, I think that Japan adopted Fascism because of the failure of democracy.