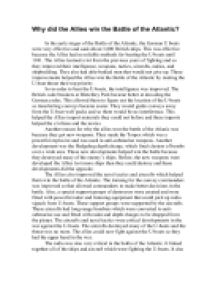 Why did the Allies win the Battle of the Atlantic?

These new developments helped win the battle because they destroyed many of the enemy's ships. Before, the new weapons were developed the Allies lost more ships than they could destroy and these developments did the opposite. The Allies also improved the naval tactics and aircrafts which helped them win the battle of the Atlantic. The training for the convey commanders was improved so that allowed commanders to make better decisions in the battle. Also, a special support groups of destroyers were created and were fitted with powerful radar and listening equipment that could pick up radio signals from U-boats. These support groups were supported by the aircrafts. ...read more.

The shipbuilding also improved and that helped the Allies win the battle of the Atlantic. The USA's shipyard began turning out cargo ships called Liberty ships in enormous numbers. The Cargo ships that once took around a year to build could now be built in less than six weeks. This allowed the allies to make more ships than the Germans were sinking which made the Allies gain an upper hand in the war. The last thing that helped the Allies win the battle of the Atlantic is the people. The sacrifice and heroism of the British and Commonwealth, American and Canadian merchant navies ensured that supplies got through to Britain. It allowed the British to gain many supplies that could help defeat the Germans. ...read more.