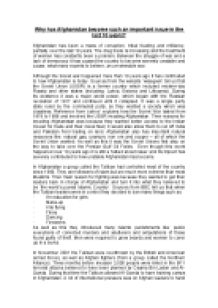 Why has Afghanistan become such an important issue in the last 10 years?

﻿Why has Afghanistan become such an important issue in the last 10 years? Afghanistan has been a mass of corruption, tribal feuding and militancy, partially over the last 10 years. The drug trade is increasing and the treatment of women has constantly been a problem. Between the struggle of war and a lack of democracy it has caused the country to become severely unstable and cause, what many experts to believe, an un-winnable war. Although the Soviet war happened more than 10 years ago it has contributed to how Afghanistan is today. Sources from the website ?wisegeek? tell us that the Soviet Union (USSR) is a former country which included modern-day Russia and other states (including: Latvia, Estonia and Lithuania). During its existence it was a major world power, which began with the Russian revolution of 1917 and continued until it collapsed. It was a single party state ruled by the communist party, so they wanted a society which was classless. Reference from ?yahoo? explains how the Soviet War lasted from 1979 to 1989 and involved the USSR invading Afghanistan. Their reasons for invading Afghanistan was because they wanted better access to the Indian Ocean for trade and their naval fleet; it would also allow them to cut off India and Pakistan from trading on land. Afghanistan also has important natural resources like: natural gas, uranium, iron ore and copper ? all of which the Soviet Union wanted. ...read more.

In the last 10 years the British Army have been deployed to Afghanistan in an attempt to stop the war. Sources from the ?BBC? tell us that UK troops are in Afghanistan to protect the national security by preventing Afghanistan from again being a safe place for international terrorist such as Al-Qaeda. It has become more of an issue as many of the British troops have lost their lives trying to protect this country. References from ?Wikipedia? say that currently 384 people (from the Army, RAF, Royal Marines and Special Forces) have lost their lives. Although plans are being made to withdraw troops from Afghanistan, they have to consider the fact that the war does not show any sign of stopping ? if we did decide to pull out troops from Afghan the situation may worsen. The government in Afghan is not stable enough to run its own democratic party?s so the UK must be involved to protect it from groups like the Taliban taking over again. It will cost much more in the long term if they decide to leave Afghanistan simply because Bin Laden has been eliminated, but before the job has been finished making Afghanistan into a stable country, whose people will not permit their government to host future terrorists. As well as this some people believe that issues in Afghanistan are not our problem and we should not be getting involved with unwanted issues. Furthermore the money spent on Afghanistan is high and the amount is increasing, with the financial situation getting worse in the UK the government need to consider withdrawing troops and putting the money to use elsewhere. ...read more.

Afghanistan has become very important due to its geographical position; it is adjacent to Middle Eastern countries that are rich in oil and natural gas and although it has little petroleum itself it borders Iran and Turkmenistan ? countries, which as two of the largest natural gas reserves in the world. Until 1991 Turkmenistan was part of the Soviet Union and its gas only flowed through Soviet pipelines. However, over the last 5 years the Russians, US and Chinese all have plans to build new pipelines for their benefit. The pipelines they all plan to build will need to run through Afghanistan, although at the moment the country is too unstable. This therefore means that it is in the interest of countries such as the US to help stabilise Afghanistan so that they can build a pipeline so that the energy can flow south. Oil and gas have motivated US involvement in the Middle East for decades. Overall, looking in on Afghanistan over the last 10 years highlights the issues which has made it an important issue. A lack of democracy, war from the Taliban and Al-Qaeda, other countries want for its natural resources and the input of the UK and US, has all added to the lack of stability and uncertainty this country has put up with. Although progress has been made, such as the killing of Osama Bin Laden and removing parties like the Taliban, the ultimate threat in which terrorist organisations may return still lingers over Afghanistan. It is still thought that this is a war which cannot be won! ...read more.