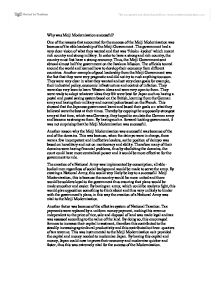 Why was Meiji Modernization successful?

Why was Meiji Modernization successful? One of the reasons that accounted for the success of the Meiji Modernization was because of the able leadership of the Meiji Government. The government had a very clear vision of what they wanted and that was 'fukoku-kyohei' which meant rich country and strong military. In order to have a strong and rich country, the country must first have a strong economy. Thus, the Meiji Government sent abroad almost half the government on the Iwakura Mission. The officials toured around the world and learned how to develop their economy from different countries. Another example of good leadership from the Meiji Government was the fact that they were very pragmatic and did not try to rush anything too soon. They were very clear in what they wanted and set very clear goals for example, their industrial policy, economic infrastructure and control of inflation. They were also very keen to learn Western ideas and were very open to them. They were ready to adopt whatever ideas they felt were best for Japan such as having a postal and postal saving system based on the British, learning from the German army and having their military and normal police based on the French. ...read more.

This was instrumental to the Meiji Modernization as it provided the capital and money needed to modernize Japan. By having this capital and money, Japan could now improve their economy and modernize quicker and faster, thus this was extremely vital for the success of the Modernization. The Meiji Modernization was also successful because of the change of social structure. The Government had decided to do away with the samurai class as the samurais were responsible for 25 to 100 percent of ordinary revenue which was proving too much of a burden for the government as they had other important issues such as Western style reforms to deal with. As a result, by making everyone equal by law, the government need not shoulder such a heavy burden and thus could concentrate their money on making Japan a strong country as they now had more money to improve their economy and infrastructure. Another reason was because of the nationalism of the Japanese. They were very patriotic to their country and were willing to make radical changes. One example that showed us how united the Japanese were, was the alliance between Choshu and Satsuma. National unity was strong at all levels, and the leaders of Japan enjoyed the cooperation of the people at large. ...read more.

Therefore, this lifted off some burden form the Japanese leaders as they had an external cash flow now. An example the success of the role private capital played was the samurai Iwasaki Yataro, with his own money he managed to become the founder of Mitsubishi. This private capital certainly helped the more traditional areas of economy such as agriculture and traditional forms of manufacturing. This was a factor for the success of the Modernization because Japan could now rely on some of her wealthy citizens to improve her economy. Japan's Meiji Modernization was successful also because of the fact it was carried out on a national scale. Everyone was involved in the modernization, thus it could be successful as work was allocated and it by carrying it out on a national scale, the whole country would be modernized and hence with more developed parts in Japan, efficiency of production would increase as there are more places which are economically developed and able to produce goods. When compared to China's modernization which only involved the coastal areas. Thus this shows us how important is it to have a country which is modernized in every area and not only in concentrated parts of the country as by making full use of the are available, Japan is able to maximize their profit and thus improve their economy. ...read more.