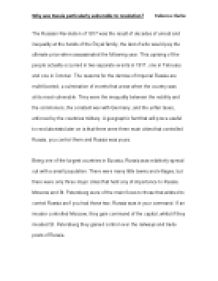 Why was Russia particularly vulnerable to revolution?

﻿Why was Russia particularly vulnerable to revolution? Rebecca Clarke The Russian Revolution of 1917 was the result of decades of unrest and inequality at the hands of the Royal family, the last of who would pay the ultimate price when assassinated the following year. This uprising of the people actually occurred in two separate events in 1917, one in February and one in October. The reasons for the demise of Imperial Russia are multi-faceted, a culmination of events that arose when the country was at its most vulnerable. They were the inequality between the nobility and the commoners, the constant war with Germany, and the unfair taxes, enforced by the countries military. A geographic fact that will prove useful to revolutionists later on is that there were three main cities that controlled Russia, you control them and Russia was yours. ...read more.

Petersburg they gained control over the railways and trade posts of Russia. Most of Russia?s population was made up of serfs and peasants. Most of them were very poor, had little to no land, and received extremely high taxes, resulting in the loss of much of their little income. On the opposite side of the pyramid was the nobility, and aristocrats, the higher classes. These people received an exemption from taxes and lived a life of wealth of luxury. The inequality between these two groups would eventually lead to the spark of the Russian Revolution over the bread taxes. Since Russia?s population in comparison to its land size was extremely small, when the country had to send much of its young forces to war, the country was in a weak state. ...read more.

Lastly were the taxes. Much of the serfs and peasants income went towards national taxes, vodka taxes, and bread taxes (there were many more), leaving little to no money for the families to survive the harsh life in Russia. Sadly the higher class had been exempted from the taxes. Leaving them to dine on feasts in big war houses, with much money to spare. The differences between the two would eventually lead in the Russian Revolutions. Having such vast differences in equality and treatment, unfair taxes, and a harsh war were the three major points that led to Russia?s Royalty fall from power. With Lenin in command of the major cities, Russia was in a new era, a stage of Revolution with its people and country. Though in the future worse was to come from Lenin?s rule. ...read more.