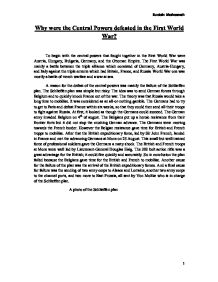 Why were the central powers defeated in the First World War

Why were the Central Powers defeated in the First World War? To begin with the central powers that fought together in the First World War were Austria, Hungary, Bulgaria, Germany, and the Ottoman Empire. The First World War was mainly a battle between the triple alliance which consisted of Germany, Austria-Hungary, and Italy against the triple entente which had Britain, France, and Russia. World War one was mostly a battle of trench warfare and a war at sea. A reason for the defeat of the central powers was mainly the failure of the Schlieffen plan. The Schlieffen plan was simple but risky. The idea was to send German forces through Belgium and to quickly knock France out of the war. The theory was that Russia would take a long time to mobilise. It was considered as an all-or-nothing gamble. The Germans had to try to get to Paris and defeat France within six weeks, so that they could then send all their troops to fight against Russia. At first, it looked as though the Germans could succeed. The German army invaded Belgium on 4th of august. ...read more.

As a response to the new war in the Atlantic, the Untied States entered the war in March 1917 and declared war against Germany this changed everything. The Americans entered the war because of the resumption of the submarine warfare and the Zimmerman telegram. The Zimmerman telegram was a telegram from the Germans encouraging the Mexicans to invade Texas. The British however intercepted the telegram and gave it to the Americans. The entry of the Americans played a critical role in the victory of the entente. The war at sea lasted very long and the British were losing a lot of ships to the German U- boats. In April 1917 875,000 tons was the total weight of British sunk ships. However in 1918 the effects of the blockade were starting to come in place. Nitrate and pork supply in Germany was decreasing. In 1916 the meat ration in Germany was equivalent to two burgers a week. Between 1914- 1918 300,000 Germans died of malnutrition, this shows the effect of the blockade. By the summer of 1918 many Germans were close to starvation. In November 1918 there were social and political revolutions in Hamburg, Kiel, Berlin, and Wilhelmshaven. ...read more.

The Ottoman Empire did well in the Dardanelles in 1915. However the Christians in the Balkans and the Arab revolt in the Middle East had forced the Ottoman Empire to collapse. Thirdly, there was Bulgaria. Bulgaria had too many enemies (the Greeks, the Romanians, the South Slavs and many other). The Bulgarians were also not too happy to be fighting on the same side of the Ottoman Empire. And finally by 1918 Bulgaria was suffering great hardship, and economic difficulties. And so the Bulgarians also collapsed. So Germany now had to choices either to surrender or to fight Britain, USA, and France alone. In the end Hindenburg advised the Kaiser to surrender. The Germans surrendered to America in the end they thought they would get the best deal from Presidents Wilson fourteen points. The British and French could have easily taken Berlin but they refused to do that, they wanted to do peace. So in conclusion there are many reasons for the defeat of the central powers. But the main reasons were the British naval blockade, the entry of the USA into the war, and the collapse of the German allies. 60 million European troops were mobilised for the war. 8 million were killed, 7 million were permanently disabled, and 15 million were seriously injured. ?? ?? ?? ?? Rudain Mahasneh 1 ...read more.