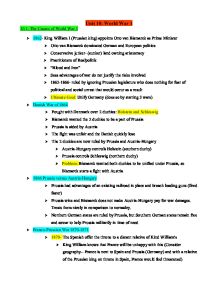 Unit 10: World War 1 10.1: The Causes of World War 1 > 1862- King William I (Prussian king) appoints Otto van Bismarck as Prime Minister > Otto van Bismarck dominated German and European politics > Conservative junker- (eunker) land owning aristocracy > Practitioners of Realpolitik > "Blood and Iron" > Sees advantages of war do not justify the risks involved > 1862-1866- ruled by ignoring Prussian legislature who does nothing for fear of political and social unrest that would occur as a result > Ultimate Goal: Unify Germany (does so by starting 3 wars) > Danish War of 1864 > Fought with Denmark over 2 duchies: Holstein and Schleswig > Bismarck wanted the 2 duchies to be a part of Prussia > Prussia is aided by Austria > The fight was unfair and the Danish quickly lose > The 2 duckies are now ruled by Prussia and Austria-Hungary > Austria-Hungary controls Holstein (southern duchy) > Prussia controls Schleswig (northern duchy) > Problem: Bismarck wanted both duchies to be unified under Prussia, so Bismarck starts a fight with Austria > 1866 Prussia versus Austria-Hungary > Prussia had advantages of an existing railroad in place and breach loading guns (fired faster) > Prussia wins and Bismarck does not make Austria-Hungary pay for war damages. Treats them nicely in comparison to normalcy. > Northern German states are ruled by Prussia, but Southern German states remain free and swear to help Prussia militarily in time of need > Franco-Prussian War 1870-1871 > 1870- The Spanish offer the throne to a distant relative of Kind William's > King William knows that France will be unhappy with this (Consider geography-- France is next to Spain and Prussia (Germany) and with a relative of the Prussian king on throne in Spain, France would feel threatened) > William made his relative not accept the Spanish crown > William forced to apologize France to keep relationship intact > Bismark gets word of this apology and somehow makes French think that William ...read more.

and protect democracy and contain German militarism because the Germans could take over and control most of Europe > Maintain "freedom of the seas" > President Wilson believed he could achieve these goals through a policy of non-belligerency that favored the Allies because without US loans and material the Allies would lose and Germany would dominate Europe > US and German trade drops drastically (was $170 mill., dropped to $1.2 mill.) > British naval blockade of Germany caused there to be no neutrality > Trade between US and Allies grew from $825 million to $3.2 billion (US has $2.3 billion in loans to Allies) > Americans public readily supports the Allies because Germany is the aggressor and is controlled by a militaristic government > February 1915, British mined North Sea and Germany blockaded Britain > The blockade was claimed to be a war zone by Germany and they said that any belligerent war shipping would be sunk with no pardon for the lives of the crew > Changes sea warfare > British tried to get by by flying American flags > Germans told US that they shouldn't go into the war zone > Wilson does not accept this because he knows it is American supplies keeping France and Britain in the war. Told Germans US had every right to trade openly > May 1915, Germans sink British passenger ship the Lusitania and killed 1200 passengers > Called unrestricted submarine warfare > US says the unrestricted submarine warfare will bring US into war on Allies side > September 1915, Germans sign the Lusitania Pledge promising not to sink any passenger boats without warning or helping those on board > March 24th 1916, Germans sink a French passenger ship, the Sussex, violating the Lusitania Pledge > US threatens again to join the war if unrestricted submarine warfare (U-boat warfare) continues > Germans sign the Sussex Pledge, apologizing and saying they won't do it anymore, but only if the US ensures that the Allies will respect German ...read more.

changes be made before they accept it > Supporters- most democrats > Wilson put in a tough spot by mild and strong reservationists > Most changes are minor except 1: US has no obligation to protect other nations or use military at the request of the League of Nations unless specific approval of congress (this is how it is anyway) > Wilson refuses Lodge and goes on a tour to try to gain support of the US public in September 1919, but gets as far as Pueblo, Colorado, where he has a stroke, making him become uncompromising > Final vote is 7 votes short of the 2/3 rule > League of Nations loses main supporter and France loses US protection > 1920- Wilson runs for re-election but loses to Harding by over 7 million votes > Harding terminates defensive treaty with France and the US signs its own peace treaty with Germany which gives the US the benefits of a treaty without the obligations 10.8 the Consequences of World War 1 > 10 million Military dead > Germany: 1.8 million (800,000 civilian death due to British blockade) > Russia: 1.7 million > Austria-Hungary: 1.4 million > British Empire: 908,000 > Italy: 650,000 > Romania: 336,000 > Ottoman Empire: 325,000 > US: 126,000 > In 1915, Turks massacred 1 million Armenians > Economy of Europe devastated > Productions fell drastically behind due to shortage of workers 9France put 20% of men in uniform > In 1914, Europe was the world's leading banker, but came out of the war in severe debt with US at banking lead > Concept of "total war" accepted > Civilian work is toward the war effort, so they become a legitimate target in war > Communists take over Russia in 1917 (uprisings in Germany and Austria) > Europe deprived of world hegemony > Western civilization is demoralized (so much sacrifice for so little gain) > Set up gateway to Great Depression 11 years later ...read more.