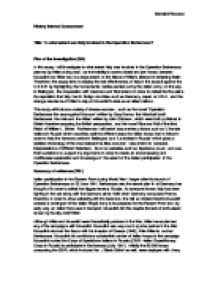 World War 2. To what extent was Italy involved in Operation Barbarossa?

History Internal Assessment Title: To what extent was Italy involved in the Operation Barbarossa? Plan of the Investigation(259) In this essay I will investigate to what extent Italy was involved in the Operation Barbarossa planned by Hitler during ww2, as the inability to communicate and join forces between Mussolini and Hitler led, to a large extent, to the failure of Hitler's attempt of defeating Stalin. Therefore this essay aims to display the real effectiveness of Italy in the assault against the U.S.S.R. by highlighting the fundamental battles carried out by the Italian Army on the way to Stalingrad, the cooperation with Germans and Romanians in order to defeat the Russians, the reputation that Italy had in foreign countries such as Germany, Japan or U.S.A. and the strange reluctance of Hitler to rely on Mussolini's state as an allied nations. This study will include a variety of diverse sources ; such as the novel 'Operation Barbarossa-the case against Moscow' written by Gary Komar, the historical book' Barbarossa: the Axis and the Allies' written by John Erickson, which were both published in Britain therefore exposing the British perspective, and the novel Rise and Fall of the third Reich of William L. Shirer. Furthermore I will watch documentary videos such as 'L'Armata Italiana in Russia' which describes well the different steps the Italian troops had to follow in order to help the Germans arrive in Stalingrad and 'La disfatta in Russia' which gives a detailed chronology of the most relevant battles occurred. ...read more.

Greeks fighting Mussolini's troops and this is confirmed by the German Navy War Diary in which is written that a huge number of weapons and soldiers were sent to the Balkans by Hitler:�'the main reason Hitler turned to the Balkans was because Yugoslavia changed camp on him and he wanted to punish them. If the Italians had of been able to take care of Greece on their own it may have shortened the German intervention in the region. Hitler had his chance to take Moscow in either July or August but decided to head south into the Ukraine'. However there are other historians who think the opposite: Corelli Barnett's classic 'The Desert Generals' states that the delay was inevitable due to the fact that the Nazi Army was not ready to oppose the Russians yet: Germany's Balkans campaign didn't delay Barbarossa by a single day. While the Germans had originally hoped to jump off before June 22, this proved to be infeasible due to logistical preparations taking longer than expected (logistics were always the German Army's weakest point) and bad weather hampering the construction of airbases in Poland. By the time the stockpiles had been moved up and the airbases completed all the units sent to that Balkans were back in position in Poland and Rumania'. � From ' Barbarossa: the Axis and the Allies' written by John Erickson. � From ' The Rise and Fall of the Third Reich' written by William L. ...read more.

17th German division which had been defeated by the Russian in 1942 and Mussolini's troops helped the Axis to protect its strategic basis. By analysing the different conflicts between Italy and U.S.S.R. we gain a further understanding of the effectiveness of the Italian troops in the Operation Barbarossa and of what they had to stand in order to protect her lands. Conclusion(142) In this essay I've investigated and analysed many aspects in which Italy was involved during the Operation Barbarossa and how the Italians either affected or helped the Germans to win against the Russians. From this essay, it becomes clear that Italy played quite a significant role in the war as the support given to the Germans was matched only by the Finnish who defeated the Russians in some occasions and it's arguable that the Italian failure in the Balkans slowed down Hitler's plan to attack Stalingrad because it was proved that the German army was not ready to fight against the U.S.S.R. Yet the Italian Army was a great support and Germany had a valuable ally by her side which made the difference in several occasions. 6 'This source is valuable to a certain extent as it contains precious information about the campaign that Italy was carrying out in Russia, however it is limited due to the lack of different interpretations discussed'. 7 'Claims that the Balkans campaign delayed Barbarossa seem to have steamed from the British government's justifications of their disastrous intervention in Greece. In reality, it made no difference'. ?? ?? ?? ?? Michelini Riccardo ...read more.