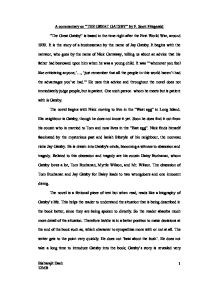 A commentary on &quot;THE GREAT GATSBY&quot; by F. Scott Fitzgerald

A commentary on "THE GREAT GATSBY" by F. Scott Fitzgerald "The Great Gatsby" is based in the time right after the First World War, around 1920. It is the story of a businessman by the name of Jay Gatsby. It begins with the narrator, who goes by the name of Nick Carraway, telling us about an advice that his father had bestowed upon him when he was a young child. It was "'whenever you feel like criticizing anyone,'..., 'just remember that all the people in this world haven't had the advantages you've had.'" He uses this advice and throughout the novel does not immediately judge people, but is patient. One such person whom he meets but is patient with is Gatsby. The novel begins with Nick moving to live in the "West egg" in Long Island. His neighbour is Gatsby, though he does not know it yet. Soon he does find it out from his cousin who is married to Tom and now lives in the "East egg". Nick finds himself fascinated by the mysterious past and lavish lifestyle of his neighbour, the nouveau riche Jay Gatsby. He is drawn into Gatsby's circle, becoming a witness to obsession and tragedy. ...read more.

In the crime business nobody is anybody's friend thus no tears on even your 'closest friend's' death. Since this was written after the First World War it shows that apart from wars, people are generally selfish and will do anything to gain money and power, examples being Meyer and Myrtle. An important issue to address is the fact that Myrtle is a weaker reflection of Gatsby's struggle. Like Myrtle his desire is influenced by social considerations. He used to be a poor person with only one pair of clothing which was his "uniform" from the army. After meeting Daisy he too desired a life like hers that is of upper class. This was for two reasons: one he wanted to experience this life which appealed to him greatly and two, he would be of the same class as Daisy and would thus have no problem in loving her and Daisy the same. Myrtle and Gatsby both desired a life, which at the end was the sole reason for Myrtle's and Gatsby's death and also to a certain extent of Mr. Wilson's death. All the issues explored through relationships and characters would not have been made possible if the language was not flexible. ...read more.

The mood or in other terms the emotional level of this piece of prose is steady. As it is a recounting of the events that happened and also considering the fact that Nick is a person who does not judge people and is a neutral person. When he recounts his past and of Gatsby and his past, there is not much emotion filled in it. He recounts it normally, though towards the end it gets a bit emotional, when the deaths of Gatsby, Myrtle and Mr. Wilson are mentioned. The circumstances under which Gatsby died were unusual. Though he had committed crimes, it was not a way that Gatsby should have died. The purpose of this novel was to gain sympathy for Gatsby, by describing his past, his dreams and his character in depth. Gatsby overall was a very 'down to earth man' and not a rich snob as many people with money and power are. Thus such a man dieing is not a cause to celebrate for, as he had never within the novel caused any harm to known or unknown people. So "...Let us learn to show friendship for a man when he is alive and not after he is dead...." After he is dead, don't completely forget the person, but "learn to move on, as time waits for no one". ?? ?? ?? ?? 1 Bishwajit Dash 12MB ...read more.