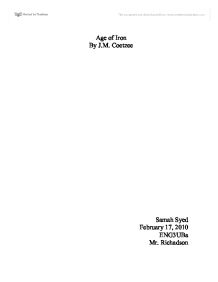 Age of Iron By J.M. Coetzee Samah Syed February 17, 2010 ENG3UBa Mr. Richadson The extract from the prose "Age of Iron" written by J.M. Coetzee is about the depiction of different generations conflicting with one another. This extract is set up as an old wise woman a one-way conversation during the 1990's. This extract illustrates the young boy being forced in listening to the old wise woman's opinion about the cons of the apartheid, more specifically being the war. Throughout the prose, the young boy refuses to listen to the voice of authority and shows the old wise woman that with stubbornness and self-determination, young children do not accept what they are told from authority. With the portrayal of the two generations conflicting, the extract suggests that the immense amount of influence of authority can play a major role on younger generations leading them to choose the wrong path. This prose is shown as a one-way conversation and is during the time period of the 1990's which is also known as the South African Apartheid. With the Apartheid regime, the tone of the extract is in a depressed mood because of their struggle to freedom. The old wise woman's opinions are demonstrated through her stream of consciousness and moves from quick dialogue with the young boy to descriptions showing the vivid imagery of the war. ...read more.

nurture. The old woman also recommends to the young boy to "go [see] a doctor soon, or a clinic to have the stitches taken out." This quotation also initiates the spark of the young boy choosing the wrong path in life, leading him into great danger because he cleverly moves away from the topic by saying that he "must rest [his] arm" and his "head is not sore." By saying this to the old woman, she immediately thinks that he is "running away from someone" and by being silent, she starts to show her caring and loving for the boy by telling him advice. Since she asked the young boy with care and love if he was running away from someone, and with no reply, the old woman got worried and starts to explain to the young boy again that he is "too young for this kind of thing". The old woman starts to tell explain to the young boy that it is not a good thing to die and that even though he is fighting for his own rights during the war, he should be careful because "[they are] throwing away [their] lives before [they] know what life can [really] be." It is also indicated in the prose, that she is an old person because she says so herself when she is explaining to the young boy. ...read more.

She starts to use basic terms for the young boy to understand as her diction goes from complex to simple. Her voice changes immediately and the old woman start to explain to the boy as if he was a little child who was learning to ride a bike. As the conclusion starts to approach, her mood also becomes more furious because she knows that compassions is the most important thing and pushes that war is a struggle and pain. With her great influence upon the young boy, "he threw off [the] talk" and chooses the path of war as a sign of discipline. In the prose "Age of Iron" the influence of authority is shown throughout the prose. With the old woman trying to lure the young boy out from war is not successful as all the young boys listen to discipline and nothing else. However with him refusing the talk which had "weighed down the generation of his grandparents and his generation of his parents"; he decided to choose the wrong path leading him into a great deal of danger. Even though, the old wise woman knew what she was talking about and had heard about past experiences through memory and sense-perception, her influence upon the boy was very significant however with the two generations conflicting, the immense amount of influence of the old wise woman wasn't successful which lead the young boy in choosing the wrong path. Word Count: 1361 ?? ?? ?? ?? ...read more.