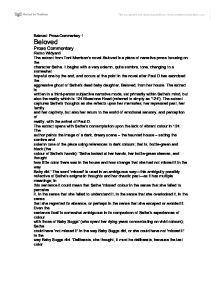 Beloved: Prose Commentary 1 Beloved Prose Commentary Retno Widyanti The extract from Toni Morrison's novel Beloved is a piece of narrative prose focusing on the character Sethe. It begins with a very solemn, quite sombre, tone, changing to a somewhat hopeful one by the end, and occurs at the point in the novel after Paul D has exorcised the aggressive ghost of Sethe's dead baby daughter, Beloved, from her house. The extract is written in a third-person subjective narrative mode, set primarily within Sethe's mind, but also the reality which is 124 Bluestone Road (referred to simply as '124'). The extract captures Sethe's thoughts as she reflects upon her memories, her repressed past, her family and her captivity, but also her return to the world of emotional sensory, and perception of reality, with the arrival of Paul D. The extract opens with Sethe's contemplation upon the lack of vibrant colour in 124. The author paints the image of a dark, dreary scene - the haunted house - setting the sombre and solemn tone of the piece using references to dark colours; that is, bottle-green and black (the colour of Sethe's hands): 'Sethe looked at her hands, her bottle-green sleeves, and thought how little color there was in the house and how strange that she had not missed it in the way Baby did.' ...read more.

It is with these thoughts that Sethe then reflects upon her past; 'There was a time when she scanned the fields every morning and every evening for her boys.' There was a time when 'she stood at the open window, unmindful of flies, her head cocked to her left shoulder, her eyes searching to the right for them.' Sethe was once able to feel hopeful, to feel that- uncaring of any distractions ('flies'); uncaring of anything but her beloved sons-there was a chance that her sons might come back, that there was a chance of finding her lost children, but could now hope for their return no longer; this is, very possibly, parallel to the way Sethe was once able to feel love, and happiness, but was now unable to do so, losing hope of ever recovering it. 'Cloud shadow on the road, an old woman, a wandering goat', Morrison conveys the growing darkness, mystery and uncertainty of Sethe's emotion with the passage of time, leading finally to the gradual repression of her dark past; 'each one looked at first like Howard-no, Buglar'. 'Little by little she stopped and their thirteen-year-old faces faded completely into their baby ones, which came to her only in sleep'; The persistent repetition of alliterative consonants ('little by little', 'she stopped', 'their thirteen-year-old', 'faces faded') ...read more.

'Windows suddenly had view': through a metaphorical window, evoking a sense of clarity, Sethe is able to see things as they are, emotionally and physically; she is able to see outside 124 and into a possible, hopeful, future; she is able to perceive life as she did long ago. The extract then concludes with an observation of Paul D's character: 'And wouldn't you know he'd be a singing man'. Paul D's 'singing', an example of auditory imagery, is an allusion to Paul D as a blues singer; an African-American slave who expresses his sorrow and misery through music. Sethe believes it is the musical expression of his sentiment that lies behind Sethe's long-lost ability to express, and perceive, her thoughts and emotions-and perhaps even the prospect of a new reality. In conclusion, the extract from Toni Morrison's novel Beloved is a highly emotive piece of narrative prose that, through a third-person subjective narrative mode, a transformation of tone from solemn and sombre at the beginning to one of hopefulness at the end, and rhetorical devices such as metaphor, alliteration and visual imagery, expresses the thoughts of an African-American slave mother with a haunting and emotionally overwhelming past as she reflects upon her memories, her broken family and her captivity, but also her return to the world of emotional sensory, perception of reality-and, with these, the prospect and hope of a new life. ...read more.