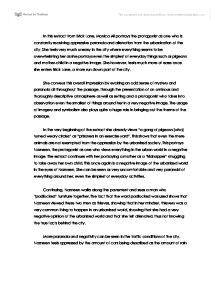 In this extract from Brick Lane, Monica Ali portrays the protagonist as one who is constantly receiving oppressive paranoia and alienation from the urbanization of the city. She feels very much uneasy in the city where everything seems to be overwhelming her as she portrays even the simplest of everyday things such as pigeons and mother-child in a negative image. She however, feels much more at ease once she enters Brick Lane, a more run down part of the city. She conveys this overall impression by evoking an odd sense of mystery and paranoia all throughout the passage, through the presentation of an ominous and thoroughly descriptive atmosphere as well as setting and a protagonist who takes into observation even the smallest of things around her in a very negative image. The usage of imagery and symbolism also plays quite a huge role in bringing out the theme of the passage. In the very beginning of the extract she already views "a gang of pigeons [who] turned weary circles" as "prisoners in an exercise yard". ...read more.

As she enters Brick Lane, a sense of familiarity clouds her and despite it being a run-down place shown by the hyperbole of "rubbish piled high as fortresses". She "had been here a few times with Chanu", a character never again mentioned in the extract. The scent of "old fried fat" and the sight of waiters "holding out menus and smiles" continually shows the fakeness and oppression the society has on Nazneen, even in a place where she is familiar with. All the hypocrisy of the world is further shown as the waiters themselves are waited on "by wives who only serve and were not served in return". Everything behind the world's fake fa�ade is scary and oppressive on Nazneen as she has no idea at all what the real motifs of people around her are. This continues to emphasize on the alienation in this capitalized world, as the people are self-centered and have no care and concern for anyone other than themselves and their money. Compiled with the oppression by the urbanization of this self-centered world, Nazneen can't help but to be paranoid about everything around her. ...read more.

Everything, everyone in this urbanized world had a destination, a plan, a objective to accomplish and will not stop at anything to achieve that. "Swift and seamless" exchanges, "exactly on time" for appointments are just a few of the normal urbanized human's daily activities and thoughts. In conclusion, the story ends with Nazneen being in contrast with everyone else in this urbanized capitalistic world of self-centeredness as she was "without a coat, without a suit, without a white face, without a destination." She was being left out, being alienated by everyone and everything in this urbanized city because she was different and she refused to conform despite all the heavy oppression on her by society. "A leaf-shake of fear - or was it excitement? - passed through her legs." It ends on a note that leaves the reader thinking, will Nazneen finally succumb to the immense pressure of oppression and conform to the norm, or will she strive on being herself and the odd one out in this capitalistic urbanized world of self-centeredness. ?? ?? ?? ?? ...read more.