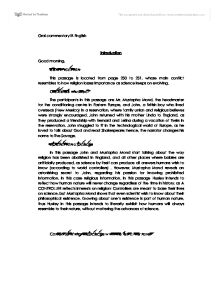 Commentary in an extract from the book &quot;Brave New World&quot; by Aldeous huxley

Oral commentary IB English Introduction Good morning, Identification This passage is located from page 230 to 231, whose main conflict resembles to how religion losses importance as science keeps on evolving. Characters involved The participants in this passage are Mr. Mustapha Mond, the headmaster for the conditioning centre in Eastern Europe, and John, a British boy who lived overseas (New Mexico) in a reservation, where family union and religious believes were strongly encouraged. John returned with his mother Linda to England, as they produced a friendship with Bernard and Lelina during a vacation of theirs in the reservation. John struggled to fit in the technological world of Europe, as he loved to talk about God and read Shakespeare; hence, the narrator changes his name to The Savage. Explanation of passage In this passage John and Mustapha Mond start talking about the way religion has been abolished in England, and all other places where babies are artificially produced, as science by itself can produce all answers humans wish to know (according to world controllers) . However, Mustapha Mond reveals an astonishing secret to John, regarding his passion for knowing prohibited information, in this case religious information. In this passage Huxley intends to reflect how human nature will never change regardless of the time in history, as A CONTROLLER reflects interests on religion! ...read more.

Therefore, the author has the intention of contrasting his invented moment in time with the present we experience, in order to make the reader realize that human behavior and ideals change along time, as humans are an evolving entity. Huxley has always an intention behind his scripts, and as it can be clearly seen along this passage, the most prevalent aspect Huxley portrays is societal behavior. Narrative purpose Along this text, Huxley implements many abbreviations and dialogues, thus he exhibits an informal narrative. The purpose of exposing an informal narrative, with a combination of third and first person is a convenient technique for creating a realistic and understandable atmosphere to the reader. By using a third person narration then the reader can know many facts orderly, and by applying the first person technique can appreciate and compare the writing, to dialogues of real life. Along the passage it is evident that Huxley has various dialogues in order for creating that seen realism, such as "Ah, here�s the book". In the case of that phrase, there�s clearly an informal mood as there would exist in normal life between two friends. Therefore, Huxley exhibits an informal ambience for making any situation believable, as real life has many informal dialogues. ...read more.

Thus, Huxley is able to produce an astonishing contrast regarding our present and how future might be, because indeed out thoughts might be subject to a community�s approval, otherwise we could be considered as irrational. Huxley gives life to this saying with the narrative he applies, as the intervention of dialogues permit the reader to contextualize his ideas in a realistic manner. Although most of the points in the passage reflect a positive character for the reader, there are certain aspects which I feel could be reinforced. This refers to literary devices; Huxley focuses on applying many adjectives for thus producing a vivid image to the reader. However, Huxley has poor implementation of literary figures, like metaphors, which permit to compare and give greater life to the descriptions. That is why of the fundamental much of literature uses literary devices. I would like to clarify that Huxley has not made a bad attempt with his book, I am simply referring to the fact that a greater usage of literary devices allow a writer to relate his sayings to aspects of real life; Huxley bases on applying powerful adjectives which is also very valid, but a greater addition of literary devices, besides repetition and images, could have given an even greater realism than the one he presently shows. ...read more.