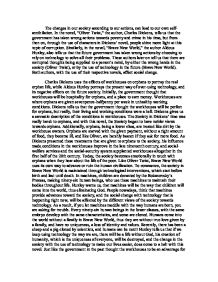 The changes in our society according to our actions, can lead to our own self-annihilation. In the novel, "Oliver Twist," the author, Charles Dickens, tells us that the government has taken wrong actions towards poverty and crime in his time, but from then on, through the use of characters in Dickens' novel, people shine more light at this topic of corruption. Similarly, in the novel, "Brave New World," the author Aldous Huxley, also tells us that the future government has taken wrong actions by choosing to rely on technology to solve all their problems. These authors later on tell us that there are corrupted thoughts being supplied to a person's mind, by either the wrong hands in the society (Oliver Twist), or by the use of technology in the future (Brave New World). Both authors, with the use of their respective novels, affect social change. Charles Dickens uses the effects of workhouses on orphans to portray the real orphan life, while Aldous Huxley portrays the present way of over-using technology, and its negative effects on the future society. Initially, the government thought that workhouses will be hospitality for orphans, and a place to earn money. Workhouses are where orphans are given sevenpence-halfpenny per week in unhealthy working conditions. Dickens tells us that the government thought the workhouses will be perfect for orphans, but really, their living and working conditions were a h**l. ...read more.

Another aspect that is protested in Dickens' novel is crime, which is taught to orphans when they fall in the wrong hands, while Huxley's novel illustrates the insight to how humans will be controlled with this technology. To present another aspect, Oliver, being naive, falls into the wrong hands of the crime area in the community, where there is no pity for a child. Oliver meets the corrupt society, where he accidentally joins Fagin's gang of thieves. Dickens' time did not only have crime, it still exists today as a big issue in society, although there is not much attention going towards it, and it could develop to be something massive. Dickens' novel brings this forward for our community to pay more attention, and with an aspect like this which has not been took care of, it is going to change society in the means of corruption. As its effect, by being exposed to the negative part of the society through influences from negative surroundings, an innocent like Oliver, gets involved in crime. By observing Fagin's apprentice, Oliver learns how to steal a handkerchief from Fagin's pocket. Dickens tells the society that there are orphans out there being influenced by people like Fagin to become ill natured, this protest brings everyone's attention together, and from Dickens' day on, although not as much, but the changes in society have involved a decrease in this kind of corruption. ...read more.

Both of these novels affect the events that are happening in the world right now. The society in Brave New World blinds its citizens to think that machines are the answer to all problems, but really problems are the result of the use of machines. This "utopian" society tries to erase anger, hatred, sadness, and poverty, all that "Oliver Twist" consists of. Governments in both novels take steps on their own decisions, not realizing the result of each decision. Charles Dickens hoped that through his novel, there would be a positive change in the society, as everyone will be touched by the life of an orphan. It is hard to believe that our world would become the "Brave New World" in the future, and thus it may seem like it never could. Yet, as we strive towards the growth of technology and improvement of our daily living we come closer to closing the gap between the freedom of emotions, self understanding, and of speech and the devastation of a dystopia. Thus, Charles Dickens' novel depicts a society which is based on individualism (the respect towards one's identity, like Oliver's identity, which is 'robbed' by others), and Aldous Huxley's novel depicts a society of collectivism (the will of making the society prosper). Both of these novels tell us to improve the changes in our society by taking actions according to their results. Creativity brought the idea, but will the idea destroy creativity? ...read more.