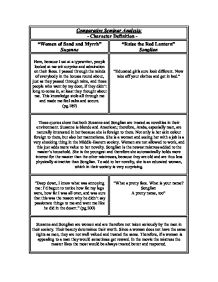 Comparative Seminar Analysis: - Character Definition - "Women of Sand and Myrrh" Suzanne "Raise the Red Lantern" Songlian Here, because I sat at a typewriter, people looked at me wit surprise and admiration on their faces. I passed through the minds of everybody in the houses round about, just as they passed through mine, and those people who went by my door, if they didn't long to come in, at least they thought about me. This knowledge stole all through me and made me feel calm and secure. (pg.189) "Educated girls sure look different. Now take off your clothes and get in bed." These quotes show that both Suzanne and Songlian are treated as novelties in their environment. Suzanne is blonde and American; therefore, Arabs, especially men, are naturally interested in her because she is foreign to them. Not only is her skin colour foreign to them, but also her mannerisms. She is a woman and seeing her with a job is a very shocking thing in the Middle-Eastern society. Women are not allowed to work, and this just adds more value to her novelty. Songlian is the newest mistress added to the master's household. She is the youngest and therefore she automatically holds more interest for the master than the other mistresses, because they are old and are thus less physically attractive than Songlian. To add to her novelty, she is an educated woman, which in their society is very surprising. "Deep down, I knew what was annoying me: I'd begun to notice how fat my legs were, how fat I was all over, and was sure that this was the reason why he didn't say passionate things to me and want me like he did in the desert." (pg.200) "What a pretty face. What is your name? Songlian A pretty name, too" Suzanne and Songlian are women and are therefore not taken seriously by the men in their society. ...read more.

In conclusion, one can say that the theme of culture and traditions lends itself as an influential factor in the book. "The moment he had closed the door he took hold of me and we stood there right by the door. He felt my b*****s, and then opened his flies at speed, as if he was receiving orders from somewhere. " (pg 219) Then I will marry a rich man. What else can be offered to women. The situation in which Suzanne was involved in portrays men as s******y aroused beings. In the case of Suzanne, the abusive use of power was done without Suzanne's approval. Both passages describe the distinctions in society as the subjugation of women and how they are portrayed as objects is relevant in the actions of the men. In addition, both quotes are powerful in exemplifying the structure of society in which women were contrastingly viewed as objects. "The authorities had introduced a regulation to the affect that a form could be refused if the accompanying photograph showed any part of the women below her neck or if a seductive expression could be dictated in her eyes." (pg 209) "We live breathing ghosts don't." "That's the difference between us and the ghosts in the way, people are ghosts and ghosts are people." The descriptions that Suzanne conveys to the certain requirements and restraints upon women comply with the theme of constant oppression against women. The comparison of ghosts and people in Raise the Red Lantern suggest their transparent nature and lack of importance in society. Like ghosts, they are invisible, overlooked, and disregarded, as worthy being only fit do the lives of men as the quotations from Women of Sand and Myrrh states. In Women of Sand and Myrrh one can understand the certain to which the women have comply in order to be accepted in society. Furthermore, the oppression against innocent women is condescending as they are deprived of their freedom and sanity. ...read more.

It is at night when the mistresses are to perform and live up to their role as concubines. "The journey had been long, two hours' drive into the heart of the desert with nothing to see except black crows against the changing hues of the great expanses of sand."(pg 217-218) Setting of the castle. In this scene we see and airily view of the third and fourth mistress on the balcony of the castle. This quote is possibly referring to the themes of both isolation and freedom. A long journey implies distance, and great exposures of sand denote a certain desolation that may come as the mood. In addition, the landscape and the different arrangements of colors of hues implies progression and freedom as Suzanne reaches the heart of the desert, detached and isolated from human existence. In this scene, Songlian (one on the right) is next to Meishan (the third mistress) on the rooftop. This is one of the most important scenes in the movie because the setting has a major contrast, which is symbolised by the two mistresses. This is additionally recognized after heard both of their opinions. The entire scene has a very symmetrical view. You can look at any side and probably find the same thing on the other, on each side there is a mistress. The colour of the outfits that the two wear are also important because they reflect there personality. One wears light coloured clothes, while the other wears dark coloured clothes. The contrasts in their clothing symbolises the contrasts in their views and outlooks on life. "The sun shone brightly all the time; even the cold weather in the desert was like springtime." (pg 201) The quote describes the setting of the desert. The sun shone brightly is one of the main chacteristics that anyone who has gone to a desert has noticed. This setting is a completely different atmosphere than the movie because the movie is in China was it is not that hot and it snows a bit in the winter. ...read more.