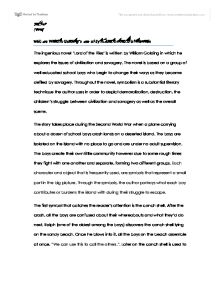 Discuss William Golding's use of symbolism in Lord of the Flies

Discuss William Golding's use of Symbolism in Lord of the Flies The ingenious novel 'Lord of the Flies' is written by William Golding in which he explores the issues of civilization and savagery. The novel is based on a group of well educated school boys who begin to change their ways as they become defiled by savagery. Throughout the novel, symbolism is a substantial literary technique the author uses in order to depict demoralization, destruction, the children's struggle between civilization and savagery as well as the overall scene. The story takes place during the Second World War when a plane carrying about a dozen of school boys crash lands on a deserted island. The boys are isolated on the island with no place to go and are under no adult supervision. The boys create their own little community however due to some rough times they fight with one another and separate, forming two different groups. ...read more.

Therefore we can infer how the conch shell is a symbol for democracy and civilized behavior. "We can't have everybody talking at once. We'll have to have 'hands up' like at school." However, as the young boys start to become defiled by savagery, the power of the conch shell starts to fade away. After Simon's brutal death, Ralph can't accept the fact that his innocent friend was murdered for no reason and he grasps onto the conch shell while laughing manically. Later on when Piggy blows into the shell trying to remind everyone of their civilized ways, the savage like boys attack him with a boulder and consequently break the conch shell. "The rock struck Piggy a glancing blow from chin to knee; the conch exploded into a thousand white fragments and ceased to exist."Through the destruction of the conch shell, the boys terminate their only hope of ever returning to their civilized ways. ...read more.

These two characters symbolize exact opposites, good and evil. However, in the end Roger kills Piggy resulting in evil overpowering purity, suggesting the end of civilization. In the same way, Simon who represents purity heads off against 'The Lord of the Flies' who represents evil and darkness. However, 'The Lord of the Flies' overpowers him through constant manipulation which leaves Simon emotionally shattered. Due to this, Simon drifts along like a hollow shell and consequently is killed by Jack and the other. Therefore, from both of these scenarios, we are able to interpret evil overpowering purity, suggesting the end of civilization. Although there may be other symbols present in the novel, these symbols William Golding used in "Lord of the Flies" were most evident and significant to the reader. These symbols convey Golding's message about human nature and with it not only comes kindness and rationality but also the hunger for power and bloodlust. Therefore, Golding uses numerous amounts of symbolism in order to illustrate how human nature operates in society. ?? ?? ?? ?? Sharif (11-B) ...read more.