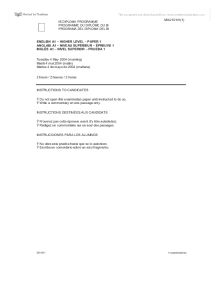 ? IB DIPLOMA PROGRAMME PROGRAMME DU DIPL�ME DU BI PROGRAMA DEL DIPLOMA DEL BI M04/101/H(1) ENGLISH A1 - HIGHER LEVEL - PAPER 1 ANGLAIS A1 - NIVEAU SUP�RIEUR - �PREUVE 1 INGL�S A1 - NIVEL SUPERIOR - PRUEBA 1 Tuesday 4 May 2004 (morning) Mardi 4 mai 2004 (matin) Martes 4 de mayo de 2004 (ma�ana) 2 hours / 2 heures / 2 horas INSTRUCTIONS TO CANDIDATES � Do not open this examination paper until instructed to do so. � Write a commentary on one passage only. INSTRUCTIONS DESTIN�ES AUX CANDIDATS � N'ouvrez pas cette �preuve avant d'y �tre autoris�(e). � R�digez un commentaire sur un seul des passages. INSTRUCCIONES PARA LOS ALUMNOS � No abra esta prueba hasta que se lo autoricen. � Escriba un comentario sobre un solo fragmento. 224-601 4 pages/p�ginas -2- Write a commentary on one of the following: 1. (a) M04/101/H(1) 5 10 15 20 25 30 35 40 The ship sank.1 It made a sound like a monstrous metallic burp. Things bubbled at the surface and then vanished. Everything was screaming: the sea, the wind, my heart. From the lifeboat I saw something in the water. I cried, 'Richard Parker, is that you? It is so hard to see. Oh, that this rain would stop! Richard Parker? Richard Parker? Yes, it is you!' I could see his head. ...read more.

1 2 The narrator and his family are transporting some of the animals from their zoo when the ship sinks. Jesus, Mary, Muhammad and Vishnu: Figures of different faiths: Jesus, Mary and Christ (l.16) are Christian; Muhammad and Allah (l.16) are Muslim and Vishnu is a Hindu god. Ravi: the narrator's brother 3 224-601 Turn over / Tournez la page / V�ase al dorso (c)[email protected] Commentary IB Survival The passage from Life of Pi centres around the protagonist who is the narrator in conflict after a ship has sunk. The overall themes of the passage centre on philosophical, particularly existential ideas about life and its purpose. The reader is launched directly into an extreme situation with a hasty pace that is reflected in the paragraph and sentence structure. The intensity of the situation is emphasised with onomatopoeia and exclamations to reflect the protagonist's state of mind. This commentary will adopt a linear approach to its analysis. The first 3-word sentence is so concise, yet full of information. This candidate does not know why the ship sank and it is fairly disconcerting to me as a reader to not know the full course of events. This is mostly due to the overall intensity of the situation and the desire to know what led to this unfortunate event. The first paragraph uses disastrous imagery which creates a powerful image in the mind of the reader, who hears a loud metallic burp. ...read more.

The "HUMPF" the buoy (c)[email protected] IB Survival makes shows the deadweight of people who merely coast through life and even though life buoys save lives it is no real way to live. The existential theme continues when we realize Pi's passion for life: he does not want to let go or give up, he wants to fight until the very end. He says that he does not know where it came from, but I claim that it is a fundamental part of human nature out of our control. Although Pi rejoices "hurrah hurrah" as Richard Parker approaches safety, he wakes up to the reality of the situation. Richard Parker was a caged animal held prisoner by Pi's family. Pi realizes that the tiger is angry and will want revenge for Pi's infringement on the animal's freedom. Pi figures out that helping this tier will threaten his own survival his mood changes completely and he decides to attack the tiger, but fails. He chooses to jump overboard and thus the roles of victim and rescuer are reversed. The passage ends as it began, with uncertainty and suspense. It is very engaging to read because of its fast pace created by abrupt sentences and short paragraphs. The continuous repetition captures the mental state of Pi and allows the reader to experience this life altering situation vicariously. I conjecture that this passage is part of the climax, or one of many high points of the novel because it seems like a coming of age story revolving around existential ideas. ...read more.