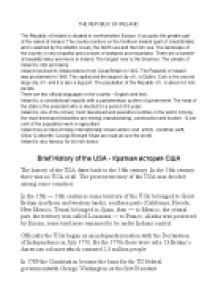 English Language Task - describing Ireland, the USA and the UK

﻿THE REPUBLIC OF IRELAND. The Republic of Ireland is situated in north-western Europe. It occupies the greater part of the island of Ireland. The country borders on the Northern Ireland (part of Great Britain) and is washed by the Atlantic ocean, the North sea and the Irish sea. The landscape of the country is very beautiful and consists of lowlands and mountains. There are a number of beautiful lakes and rivers in Ireland. The longest river is the Shannon. The climate of Ireland is mils and damp. Ireland received its independence from Great Britain in 1922. The Republic of Ireland was proclaimed in 1949. The capital and the largest city of I. is Dublin. Cork is the second large city of I. and it is also a big port. The population of the Republic of I. is about 4.5 mln people. There are two official languages in the country - English and Irish. Ireland is a constitutional republic with a parliamentary system of government. The head of the state is the president who is elected for a period of 6 years. Ireland is one of the richest, most developed and peaceful countries in the world. Among the most developed industries are mining, manufacturing, construction and tourism. 12 per cent of the population work in agriculture. Ireland has produced many internationally known writers and artists. Jonathan swift, Oliver Goldsmith, George Bernard Shaw are read all over the world. ...read more.

The population of the USA is about 250 million people; most of the population lives in towns and cities. The USA is a very large country, so it has several different climatic regions. The United States is a land of rivers and lakes. The longest rivers in the USA are the Mississippi, the Missouri and the Rio Grande. The highest mountains are the Rocky Mountains, the Cordillera and the Sierra Nevada. The United States is rich in natural and mineral resources. It produces copper, oil, iron ore and coal. It is a highly-developed industrial and agricultural country. There are many big cities in the USA, such as New York, Chicago, Los Angeles, Philadelphia and others. The national capital is Washington, D.C. Its population is about 3.4 million. Washington was built in the late eighteenth century as the centre of government. It was named after George Washington. The USA became the world leading country at the beginning of the twentieth century. There are fifty states in the United States of America. The United States is a young country. Its written history is only a few hundred years old. It is sometimes called the "New World". Over the last 400 years millions of people have come to start a new life in this "New World". The people of the United States are a mixture of many different nationalities. There are two main parties in the USA - the Republican party and the Democratic party. ...read more.

New York is the city of famous skyscrapers. The highest building is now the Impire State Building after the Twin towers were exploded in 2001. Great Britain The United Kingdom of G.B. and Northern Irelands is situated on the British Isles. The British Isles consist of two large islands, G.B. and Ireland, and about five thousand small islands. The UK is made up of four countries: England, Wales, Scotland and Northern Ireland. The capital of the UK is London. The British Isles are separated from the European continent by the North Sea and the English Channel. The western coast of GB is washed by the Atlantic Ocean and the Irish Sea. The landscape of G.B. include mountains and lowlands. There are a lot of rivers in GB, but they are not very long. The Severn is the longest river, while the Thames is the deepest and the most important one. In Scotland there are a lot of lakes. The climate of G.B. is mild and damp. It is not hot in summer and not cold in winter. The U.K. is a parliamentary mornachy. The British Parliament consists of two Houses: the House of Lords and the House of Commons. The prime Minister is the head of the government. There are two main parties in G.B. - the Labour party and the Conservative party. The U.K. is a highly developed country. The main industrial centers are Sheffield, Birmingham and Manchester. There sre many universities, cjlleges, libraries, museums and theatres in the country. The most famous universities in G.B. are Oxford and Cambridge. ...read more.