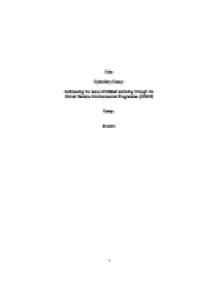 Title: Epistolary Essay: Addressing the issue of Global warming through the United Nations Environmental Programme (UNEP) Essay: Student Dear Mr. Banki Moon I am writing to bring to light some concerns I have about the future of our world in relation to global warming. I know that that one of the hot topics your organization through UNEP (United nations environmental programme ) is currently grappling with is the issue related to greenhouse gases and how to reduce its effect both in the developed and developing countries. The paradox towards the fight of green house gases is that industrialization is the key to development of economy in third world countries and the developed. However it is as a result of industrialization that green house gases are threatening to bring our planet to extinction. This is because most green house gases are emitted from industries and burning of fossil fuels both in the urban and rural areas. The million dollar question remains, will we compromise the future of our planet in the name of achieving economic prosperity through industrialization? Or will we compromise achieving economic prosperity in the name of saving the world for our future generation. ...read more.

Moreover the IPCC report further states that global warming is more rampant in the developing countries. The reports indicate that those with poor economies are more vulnerable to effects of climatic changes. Your organization via the UNEP has greater mandate in helping to reduce global warming in third world countries through advocating for use of renewable sources of energy to curb the effect of green house gases. In both scenarios the questions present quite a big dilemma to the UNEP office in trying to solve this issue of Global warming. It is apparently clear that the task force involved with solving the issue of global warming knows that the green house gases are able to trap heat and cause the famous green house effect which causes the rising of global temperatures. This is further worsened by human activities that in the recent past have been detrimental to the environment. According to UN report on climatic change through its constituent body IPCC(International Panel on Climatic Change) burning of solid waste and fossil fuels are some of the major causes of green house gases. The report indicates that approximately 80 percent of carbon dioxide emission into o the atmosphere comes from factories, businesses and automobile heat. ...read more.

earth's surface Use of renewable sources of energy has been has been depicted as the most efficient way of challenging the issue of global warming. Although expensive, use of hydroelectric, solar energy and wind has been considered to reduce the amount green house gases in the atmosphere by far. Your organization can call for use of these renewable sources of energy and also offer solar panels to developing countries Since your UNEP a constituent body of your organization was formed with aim of facilitating shift towards use of cleaner sources of energy and support towards sustainable development especially in developing countries, you can use this avenue as the Secretary General of the organization to urge the governments of the member countries to pass laws to reduce emissions of green houses gases by factories. You can also call upon beneficiaries countries benefiting from your organization to form treaties with other neighboring countries to bind limits on emissions of green house gases. Additionally the report of Intergovernmental Panel on Climate Change (IPCC) can be really good ammunition to convince world leaders in drafting a global plan to act on the issue of global warming especially with the first approaching deadline of the Kyoto protocol which expires late 2012. ...read more.