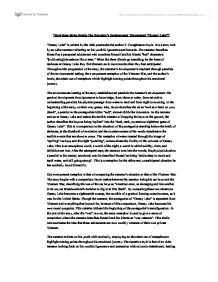 "How Does Boyle Depict The Narrator's Development Throughout "Greasy Lake"? "Greasy Lake" is written by the Irish postmodernist author T. Coraghesson Boyle. It is a story told by an older narrator reflecting on his youthful ignorance and bravado. The narrator describes himself as a pampered adolescent who considers himself and his friends "bad" characters, "[cultivating] decadence like a taste." When the three friends go searching for the heart of darkness at Greasy Lake they find themselves in more trouble than they had anticipated. Throughout the progression of the story, the narrator's development is depicted through parallels of the environmental setting, the ever-present metaphor of the Vietnam War, and the author's ironic, abundant use of metaphors which highlight turning points throughout his emotional journey. The environmental setting of the story establishes and parallels the narrator's development. His gradual development from ignorance to knowledge, from chaos to order, from naivet� to understanding parallels his physical passage from water to land and from night to morning. ...read more.

By comparing these two situations Greasy Lake becomes a nightmarish swamp, the crucible of a gradual forming consciousness, as it was for the United States. Though the narrator, the protagonist of "Greasy Lake" is separated from Vietnam and everything that it stood for, because of this comparison, Greasy Lake becomes his own moral quagmire. This mistake initiated the beginning of the protagonist's transfiguration. At the end of the story, after the "war" is over, the same metaphor is used to give a sense of completion where the narrator describes himself and his friends as "war veterans". This simile communicates the idea that these adolescents are now worldly veterans of their own private Vietnam. The narrator reflects on his youth with ironically, employing an abundant use of metaphors to highlight turning points throughout his emotional journey. The narrative style is that of an older narrator looking back on his youthful ignorance and pretension with an ironic detachment, leading us to expect the development of the adolescent, eventually resulting in the awareness of truth dawning upon him. ...read more.

Though they are now war veterans, the shock of war has not enlightened them. Instead, they are separated not only from this experience, but from life itself and are unable to speak. Throughout the story, Boyle employs different forms of comparisons and descriptions to effectively depict the narrator's development. Because of this, we could easily confuse "Greasy Lake" with a story of revelation. However, if we do so, we misunderstand the very essence of postmodern fiction. By means of both style and silence, Boyle denies the possibility of his character's learning anything from the experience. The character of the narrator has developed, but at the end, he "put the car in gear" and began "creeping towards the highway"; returning to his origin. "Greasy Lake" is a story that fluidly communicates the development of characters but draws back at every opportunity of displaying any true revelation in such a way that the story almost parodies the belief in revelation itself. ...read more.