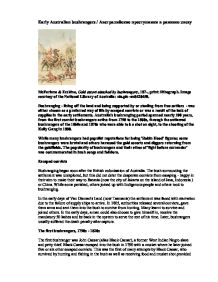 Early Australian bushrangers / ????????????? ??????????? ? ?????? ????? McFarlane & Erskine, Gold escort attacked by bushrangers, 187-, print: lithograph. Image courtesy of the National Library of Australia: nla.pic-an8420450. Bushranging - living off the land and being supported by or stealing from free settlers - was either chosen as a preferred way of life by escaped convicts or was a result of the lack of supplies in the early settlements. Australia's bushranging period spanned nearly 100 years, from the first convict bushrangers active from 1790 to the 1860s, through the outlawed bushrangers of the 1860s and 1870s who were able to be shot on sight, to the shooting of the Kelly Gang in 1880. While many bushrangers had populist reputations for being 'Robin Hood' figures; some bushrangers were brutal and others harassed the gold escorts and diggers returning from the goldfields. The popularity of bushrangers and their ethos of 'fight before surrender' was commemorated in bush songs and folklore. Escaped convicts Bushranging began soon after the British colonisation of Australia. The bush surrounding the settlement was unexplored, but this did not deter the desperate convicts from escaping - happy in their aim to make their way to Batavia (now the city of Jakarta on the island of Java, Indonesia ) or China. While some perished, others joined up with Indigenous people and others took to bushranging. In the early days of Van Dieman's Land (now Tasmania) the settlement was faced with starvation due to the failure of supply ships to arrive. In 1805, authorities released several convicts, gave them arms and sent them into the bush to survive from hunting. Many learnt to survive and joined others. In the early days, a man could also choose to give himself in, receive the mandatory 50 lashes and be back in the system to serve the rest of his time. Later, bushrangers usually suffered the death penalty after capture. ...read more.

Tracker Riley, as he was known, received the King's Medal in 1942 for his work on a serial killing case. His son, Michael Riley, made a documentary called Black Tracker, which tells Tracker Riley's life story. Famous Aboriginal trackers - yesterday and today Neighbour, from Parliamentary Papers 1914. Courtesy of Australasian Legal Information Institute. The first Aboriginal man to receive the Albert Medal for Bravery (the highest award possible for police officers) was a man known as Neighbour, who was awarded the medal for rescuing a police officer from the flooding Wilton river, in the Roper River area of the Northern Territory in south-east Arnhem Land in 1911. Neighbour rescued the policeman, who was clinging precariously to some pandanus palms in the middle of the fast-flowing water, whilst wearing heavy chains around his neck. Neighbour went on to work as a tracker with the Northern Territory Police. Until 1900, many Aboriginal men and some women worked as police trackers, often on a casual basis or sometimes for longer stints. Often they were only paid a few shillings with rations supplied to their families. Trackers were employed full-time by the Northern Territory police until the late 1980s when they began to be phased out. Northern Territory artist Long Tom Tjapanangka worked both as a stockhand and police tracker for years before commencing his artistic career. Yuendumu man Teddy Egan is probably the best known tracker in Australia today. In 1967, he assisted in the capture of an escaped murder suspect after two police officers were wounded in the pursuit. In 2000, he helped Northern Territory police to recapture an escaped prisoner. Egan says that tracking humans is much easier than tracking animals, because 'people make too much mess.' He was also one of four trackers used by Barrow Creek police to try to find missing English tourist Peter Falconio. The Australian police still occasionally call on the services of Aboriginal trackers, particularly in Western Australia, Queensland and the Northern Territory. ...read more.

About myself / ? ???? I have many hobbies because there are many interesting things to do. Unfortunately I don't have much spare time as I'm going to be a student. That's why I have to study a lot. I like doing different things: Such as reading detective stories, listening to the music, playing tennis with my classmates. But my favorite hobby is solving crossword puzzles. It's not only interesting, but also very useful. When you try to solve the puzzle you find out and learn a lot of different facts. Because in puzzles there are questions about famous people, geographical places, countries, scientific achievements and so on. You also train your brain. The crosswords are published in newspapers and magazines and there are special newspapers that contain only crosswords. I sometimes try to make up my own puzzle and I can say that it is not less interesting. All the members of our family like to take part in solving the puzzles and this unites us very much. ________________________________________ Many people have hobbies. They make our life more interesting. A hobby is what people like to do when they have free time. Everyone chooses a hobby according to his character and taste. Some people are fond of music, others like to read books. Some people like to collect stamps, coins or badges, others prefer gardening or hiking or taking photographs. Some people like to cook, others like to knitter sew. Generally speaking, a hobby is a matter of taste. My hobby is playing computer games. Both grown-ups and children are fond of it now. It has become one of the most popular hobbies nowadays. I think that playing with a computer is very interesting. It is not only "wasting time" as some people say. Computer games make us to think things over proper-ly, they widen and develop our mind and imagination. I have a good collection of different games and when I have some free time I play them with great pleasure. My favourite game is... Some of my friends have the same hobby and we like to play together. ...read more.