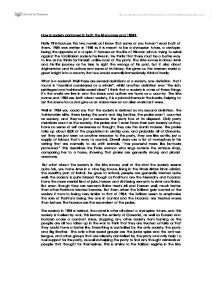 How is society portrayed in both the kite runner and 1984?

How is society portrayed in both the kite runner and 1984? Firstly I'll introduce the two novels as I know that some of you haven't read both of them, 1984 was written in 1948 so it is meant to be a dystopian future, a dystopia being the opposite of a utopia. It focuses on the life of Winston who is trying to rebel against the totalitarian society he lives in. He thinks that there must be a better way to live as he thinks for himself, unlike most of the party. The Kite runner is about Amir and his life journey as he tries to right the wrongs of his past, but it also about Afghanistan and its culture and some of its history, this gives us, the western world a great insight into a country that we would normally immediately think of badly. What is a society? Well there are several definitions of a society, one definition that I found is "mankind considered as a whole", whilst another definition was "the rich, privileged and fashionable social class" I think that a society is a mix of these things, it's the world we live in and the ideas and culture we have as a country. ...read more.

The people in Afghanistan supported them because they got rid of Showari, the afghan word used for the Russians who had been oppressing Afghanistan previously. In kite runner the Taliban regime is the only social group really allowed, people couldn't even gather in large groups when the Taliban were in power, unless it was an organised gathering that was supporting the Taliban. In 1984 the society controls the entire lives of all party members, and limits the lives of the proles. Inner party members get luxuries, they have real coffee and tea, they get chocolate and O'Brien even has a butler. Outer party members are given rations of victory products which are poorly made, such as the victory gin that's described as being oily and is compared to nitric acid, and victory cigarettes, which Winston, and I quote, "incautiously held it upright, where upon the tobacco fell out onto the floor", these poorly made products are what the outer party members get so what the proles get to live on must be worse. In the kite runner the Taliban eat meat, they have whatever they can take, a good example of this is Assef going to the orphanage and taking children, they could do what they wanted because no one was going to stop them, the Pashtun survive on vegetables ...read more.

The only people who didn't have to conform were the outcasts, the proles had to be placid and do whatever the party called on them for, but apart from that they were pretty much free to do what they wanted, everything they did was controlled by the party, so the party knew everything they did, even if the proles thought otherwise. In the kite runner the hazaras don't have to conform, they are completely outcast and below the law. The Taliban had tried to get rid of them completely, any surviving hazaras were in hiding. But with all these similarities it would seem that the Taliban regime was almost the same as INGSOC, the society in 1984. Many people have read Orwell's novel as a warning for the future, as it was written more than thirty years before it was set. But what happened in Afghanistan, and the similar things that go on in other countries are real, they aren't fiction and we know all about them, we hear and see these things on a daily basis. So have we overlooked Orwell's warning, is it all starting to come true? Could the UK be next, or the world? Only time will tell. Thanks for listening, any questions? ...read more.