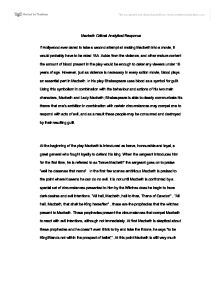 Macbeth Critical Analytical Response If Hollywood ever dared to take a second attempt at making Macbeth into a movie, it would probably have to be rated 18A. Aside from the violence, and other mature content the amount of blood present in the play would be enough to deter any viewers under 18 years of age. However, just as violence is necessary in every action movie, blood plays an essential part in Macbeth. In his play Shakespeare uses blood as a symbol for guilt. Using this symbolism in combination with the behaviour and actions of his two main characters, Macbeth and Lady Macbeth; Shakespeare is able to clearly communicate his theme that one's ambition in combination with certain circumstances may compel one to respond with acts of evil, and as a result these people may be consumed and destroyed by their resulting guilt. At the beginning of the play Macbeth is introduced as brave, honourable and loyal, a great general who fought loyally to defend his king. When the sergeant introduces him for the first time, he is referred to as "brave Macbeth" the sergeant goes on to praise "well he deserves that name". In the first few scenes ambitious Macbeth is praised to the point where it seems he can do no evil. ...read more.

An act Macbeth knows is of unspeakable evil but was compelled to do as a result of his reaction to the circumstances presented by the Witches. Lady Macbeth, perhaps even more ambitious than Macbeth, is even more compelled to react, when Macbeth presents her the circumstances presented to him by the Witches in the form of a letter, Lady Macbeth immediately begins to respond with evil intentions. Unlike Macbeth, who in the very least debates on reasons why not to kill Duncan, Lady Macbeth is so consumed by ambition and the need to react to her situation that she does not even see any reasons that would prevent her from fulfilling the prophecy. Even though Lady Macbeth knows that attaining her desires would mean committing crimes of unspeakable treachery, shown when she pleads to the spirits to "take [her] milk for gall", to "pall thee in the dunnest smoke of h**l" and to "stop the access ... to remorse", she is so compelled by ambition and the need to respond that she sees this as her only path, she sees the killing of Duncan as her only option and her destiny. Although Macbeth and Lady Macbeth do successfully respond to the circumstances presented to them by the Witches by becoming king and queen. ...read more.

However, the full force of her guilt catches up with Lady Macbeth in Act 5, at this time her guilty conscience is already starting to impact her mentally, she begins to sleep walk and is becoming more and more mentally unstable. In one of her sleep walks she is seen rubbing her hands together profusely trying to wash imaginary blood from her hands, again blood represents guilt. As Lady Macbeth is trying desperately to rid herself of her guilt she says "Here's the smell of blood still./All the perfumes of Arabia will not sweeten this little hand." . Not unlike in Macbeth's case Shakespeare also uses hyperbole to emphasize the fact the Lady Macbeth is also stained forever by her guilt. This guilt eventually destroys Lady Macbeth completely, driving her to commit suicide later in the same act. Using the prophecies from the Witches, Shakespeare is able to present a special set of circumstance in which Macbeth and Lady Macbeth are compelled to respond to. Utilizing the acts of evil that Macbeth and Lady Macbeth undergo in their response to these circumstances, and the resulting fate that befalls them, Shakespeare is able to clearly demonstrate his theme. That certain circumstance when coupled with one's ambition is enough to compel one to do acts of evil, however, being compelled to act against ones conscience may leave one susceptible to guilt which eventually may bring about one's doom. ?? ?? ?? ?? ...read more.

This essay demonstrates a good understanding of Shakespeare's attention to the themes of ambition, guilt and the battling of the conscience with the will in Macbeth; however, the quality of the writing makes what is an essentially sound argument difficult ...

This essay demonstrates a good understanding of Shakespeare's attention to the themes of ambition, guilt and the battling of the conscience with the will in Macbeth; however, the quality of the writing makes what is an essentially sound argument difficult to fully detect. Although the student's first paragraph is dangerously close to merely paraphrasing the plot developments in the first few scenes of the play, the third paragraph begins to bring some much-needed analysis to the moments of internal confusion and conflicting ambition described in the first two paragraphs. The student has understood the prompt, but adopting a structure which delves immediately into the examination of blood would have demonstrated this understanding earlier on.

As it is blood as a symbol of guilt which is being examined here, it would have been prudent to sustain an engagement with how this manifests throughout the text, rather than bring it in near the end in an attempt to tie many plot moments and quotes under a hurriedly-identified literary device. It is the final paragraph which hints at a deeper capacity for analysis; if only that well-identified final sentence, regarding the tragic irreconcilability of ambition and conscience, had been a thread running through the student's argument from beginning until the end, this essay would have reached the next level of evaluation.

Unfortunately, grammar and punctuation remain the really problematic aspects of this essay. The student should review how to quote from plays - correct quotation mark placement and page references are few and far between. There are numerous run-on sentences. For instance, "... Macbeth will never be freed from his guilt. This guilt that now stains Macbeth in the form of blood..." and other similar structures should be grammatically reconfigured: "...Macbeth will never be freed from his guilt, which stains him in the form of blood..." The whole essay would benefit from a close proof-read in order to cut out unnecessary words and extra quotations that only serve as additional emphasis on points already mentioned.