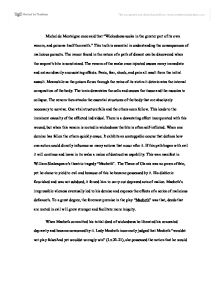 Michel de Montaigne once said that "Wickedness sucks in the greater part of its own venom, and poisons itself therewith." This truth is essential in understanding the consequences of malicious pursuits. The rancor found in the nature of a path of dissent can be discovered when the serpent's bite is scrutinized. The venom of the snake once injected causes many immediate and extraordinarily excruciating effects. Panic, fear, shock, and pain all result from the initial assault. Meanwhile as the poison flows through the veins of its victim it deteriorates the internal composition of the body. The toxin devastates the cells and causes the tissue and the muscles to collapse. The venom then attacks the essential structures of the body that are absolutely necessary to survive. One vital structure falls and the others soon follow. This leads to the imminent casualty of the afflicted individual. There is a devastating effect incorporated with this wound, but when this venom is rooted in wickedness the bite is often self-inflicted. When one domino has fallen the others quickly ensue. It exhibits an unstoppable course that defines how one action could directly influence so many actions that occur after it. ...read more.

Macbeth considers that the crown has given him nothing so far, "Upon my head they plac'd a fruitless crown, and put a barren sceptre in my gripe" (III.i. 62-63). Macbeth realized that to assure that he was "safely thus" (III.i.50) he would need to kill Banquo, his greatest comrade, and defend his seat on the throne. He ordered the murder of Banquo and his son, Fleance. This disregard for his friendship and his camaraderie towards Banquo demonstrates his rapidly increasing malignancy. This murder was initiated due to Macbeth's earliest horrific undertaking. He later evaluated that "blood will have blood" (III.iv.121). Violence begets more violence; his initial evil act caused the blood of his best friend to be spilt. He later accepted the witches' malefic prophecy about Macduff being the only one who could harm him and decided to make "assurance double" (IV.i.82) and kill Macduff's wife, his son and the rest of his household. This massacre in particular exemplifies his growing villainy. His terrible perversity had increased and reached a pinnacle in undertaking such a heartless course of action. His needless murder of such an innocent and bright young child makes clemency impossible. ...read more.

This wickedness is spurred further and further and it in turn forces him to act in a vindictive and vicious manner. He is in due course sent to his demise because of his demonic nature. This reveals the consequences of his malevolence. Shakespeare's "Macbeth" fully demonstrates the destructive capability of the route that trails an act ingrained in maliciousness. A ripple effect is an ideal analogy for describing how one distinct part of the more minute system can influence the entire system. The ripple effect would extend across the entire system just as if a rock was taken and thrown into a pond. The initial impact of the rock would cause not just one ripple throughout the pond, but also many ripples that would expand in their magnitude throughout the entire pond. An irreversible course of consequences commences in the pond and escalates into an event much greater than its beginning. Actions act much like the pebble thrown in the pond. Actions are influenced by previous consequences; furthermore these consequences influence the actions that follow. Consequences are a complex part of human existence and its innate nature; they are the result of the decisions and the actions that are performed. They are the only genuine scale for right and wrong, good and evil. ...read more.