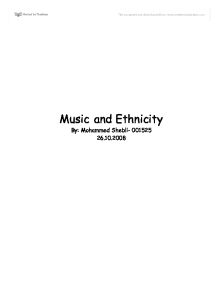 Music and Ethnicity By: Mohammed Shebli- 001525 26.10.2008 Task: To write an informative piece of journalistic writing. You need to mention and focus on how ethnicity is represented in music; However, this should not be the only thing you mention. What is Music? Some define it as emotions being sang. Other say it is a tool for entertainment. Music is the representation of thoughts, emotions, and experience. It varies from different genres of rap, rock, country...etc. to different purposes such as wedding songs, birthday songs, church and religious music, to music of sadness or victory such as the songs sang by slaves in America in the last century. It is used since the crack of dawn as an effective technique to send an idea or a thought. What makes it so effective is that not just lyrics create the emotion, but rhythm and sound too. ...read more.

Why is the "thug" way of life appealing to African-American boys more than white people? Let's face it, if a group of white people saw 50 cent and his G-unit gang walking behind them, they will be scared. This is because of the overall image of Black people drawn by rap music, and we call that stereotype. If popular rappers really want to "keep it real," they need to tell the truth. Nobody parties 24/7 - try talking about real experiences, love, pain, sorrow, happiness. This is exactly what Eminem does when he wrote the lyrics of 8 mile. It is an emotional song that contains more substance than other rap. In this song, Eminem shows his weaknesses, "sit alone and I cry", and he criticize himself to be more successful in life. He also says, "I gotta get out there...the second that I blow", these lyrics show the educated part of Eminem when he sets a positive role-model when explaining he needs to leave the thug streets and the only way to do that is success. ...read more.

Spike Lee said at a college: "We buy all this stuff (rap music), not even thinking about what's behind it. ... Think about the power that we have. We can't just sit back and think it doesn't affect us. We have to do something about it. We have to be more choosy about the types of stuff we support." This shows the influence of bad lyrics on teenagers these days. Few rappers speak of peace, education, better future, or political subjects. We can't blame the rappers, because if they change their lyrics they will lose audience. Therefore, we, as listeners need to change our ideas and role-models. We have to choose our music carefully because music plays a big role in personality, character, and believes. We see all these thug life promoters win a Grammy and I don't know for what. We don't see the real artists winning trophies. This is what the world is choosing, the bad, negative role-models. ...read more.