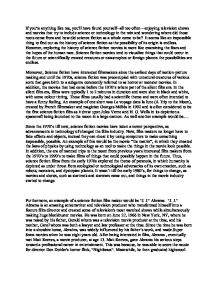 Science Fiction Films. Science fiction movies tend to visualize things that could occur in the future or scientifically created creatures or catastrophes or foreign planets the possibilities are endless.

If you're anything like me, you'll have found yourself--all too often-enjoying television shows and movies that try to include science or technology in the mix and wondering where did those roots come from and how did science fiction as a whole come to be? It seems like an impossible thing to find out as the history of science fiction as the possibility of its origin is endless. However, exploring the history of science fiction movies is more like examining the fears and the hopes of the human race. Science fiction movies tend to visualize things that could occur in the future or scientifically created creatures or catastrophes or foreign planets the possibilities are endless. Moreover, Science fiction have interested filmmakers since the earliest days of motion-picture making and until the 1970s, science fiction was preoccupied with unnatural creatures of various sorts that gave birth to a subgenre commonly referred to as horror or monster movies. ...read more.

An example of this would be the movie "the matrix", in which they cheated the laws of physics by using technology as an tool to make the things in the movie look possible. In addition, the era of manned trips to the moon from previous years interested film makers from the 1970's to 1990's to make films of things that could possibly happen in the future. Thus, science fiction films from the early 1970s explored the theme of paranoia, in which humanity is depicted as under threat from ecological or technological adversaries of its own creation, such as robots, monsters, and dystopian planets. It wasn't till the early 1980's, for things to change, as movies and shows, such as startreck and starwars came out, and things in the movie industry started to change. Furthermore, an example of a science fiction film maker would be "J. ...read more.

Once he was finished with college, Abrams, inspiration took to him and he went into the business of a screenwriter and eventually was collaborated with Jill Mazursky for the movie "Taking Care of Business" Though he had a rather harsh start in script writing, Abrams made his first apperience in the hit drama, "Felicity", which garnered strange controversy surrounding Keri Russell's decision to cut her famously curly hair. After he was a huge success Abrams began getting his name out with the drama, "Alias" for Abc and cbc, which turned the protagonist, Jennifer Garner into an amazing star. Then he went on to work on a mysterious sci-fi thriller called "Lost". When he left the series through the mists of it, Abrams ventured into feature film directing with the well-received "Mission: Impossible III", "Star Trek" that launched his blockbuster career in earnest and foretold of even greater things to come, and"Super 8" (2011), which audiences and critics hailed as one of Abrams' most engaging efforts in a career already rife with crowd-pleasing entertainment. ...read more.