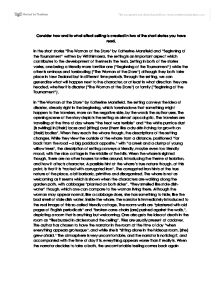 Setting in &quot;The Woman at the Store&quot; and Beginning of the Tournament

Consider how and to what effect setting is created in two of the short stories you have read. In the short stories "The Woman at the Store" by Katherine Mansfield and "Beginning of the Tournament" written by Witi Ihimaera, the setting is an important aspect which contributes to the development of themes in the texts. Setting in both of the stories varies, one being a friendly more familiar one ("Beginning of the Tournament") while the other is ominous and foreboding ("The Woman at the Store") although they both take place in New Zealand but in different time periods. Through the setting, we can generalize what will happen next to the character, or at least in what direction they are headed, whether it is disaster ("The Woman at the Store") or family ("Beginning of the Tournament"). In "The Woman at the Store" by Katherine Mansfield, the setting conveys the idea of disaster, already right in the beginning, which foreshadows that something might happen to the travelers, more on the negative side, by the words the author uses. The opening scene of the story depicts the setting as almost apocalyptic. The travelers are travelling at the time of day where "the heat was terrible" and "the white pumice dust [is swirling] in [their] faces and [sifting] over [them like a dry-skin itching for growth on [their] bodies". ...read more.

The description of the storm confirms all suspicions that something bad will definitely befall the characters. The scene is tense, with everyone seated around a table in a rundown room, in an uncomfortable environment, when the storm starts. With the idea of the "rain [beginning] to fall, sharp as cannon shot on the roof", the looming outline of disaster is sighted. The sleepless night at the whare confirms all the previous suspicions, when the child draws the picture of the woman shooting her husband and burying him in a hole. The woman' health has deteriorated due to her isolation at in the whare, with no company except her husband, who came back from time to time. After brother and narrator leave the whare, a new day begins, where all of their troubles at the whare have been overcome. With the "white clouds [floating] over a pink sky", the author describes the scene as if it were paradise-like and the characters have a chance to start a new beginning. In "Beginning of the Tournament" by Witi Ihimaera, the setting contributes to the theme of family and how important it is to come together as one community. The story takes place in a rural Maori village called Waituhi, where everyone knows everyone else. The sense of togetherness is then developed through the hockey tournament that takes place, with visiting Maoris from other villages. ...read more.

In "Woman at the Store", the setting is almost always scary/foreboding, conveying the message to the reader that something will go wrong along the narrator's path in the story. This is shown immediately in the beginning paragraph, when they are walking through the almost apocalyptic landscape. The sense of ill happening grows further when the whare is sighted, and the characters are introduced to the lonely, strange woman. The strangeness of the whare become clear when the narrator and her brother find out that the woman murdered her husband, after too many years alone. The setting foreshadows a bad turn in the story and is also the fault of the woman's madness due to her isolation. In "Beginning of the Tournament", the setting contributes to the dominant theme of family and coming together, as the small, rural village is a meeting point for the annual hockey tournament. The narrator invites his friend Jerry for the tournament, who comes, awaiting an organized game of hockey. He is pleasantly surprised by the true nature of the tournament though, which is a coming together of family and friends. He learns that the Maoris place family values before everything else, which he learns from the narrator's cousin Moana. The setting strengthens the family values theme as the small village makes everyone seem closer together. Both stories have settings which contribute to either a theme or idea present in the stories, and through the author's choice of setting and description, the stories manage to convey ideas more clearly and fully. ...read more.