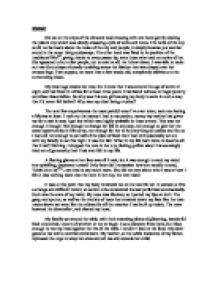 Memoir She sat on the steps of the elevated road crossing with one hand gently shaking the plastic cup which was slowly amassing a pile of coins and notes. The rattle of the cup could not be heard above the noise of the city and people, it simply became just another sound in the never tiring audioscape. The other hand was fixed in its position of the traditional Wai{1} giving thanks to every passer by, even those who took no notice of her. She appeared to but a few people, not to exist at all. As I drew closer, I was able to make out two furry shapes clumsily tumbling across the blanket that was draped over her crossed legs. Two puppies, no more than a few weeks old, completely oblivious to the surrounding chaos. ...read more.

It was not fair. What in my life had I done to deserve all that I had? Nothing. I dropped the note in her cup, feeling guiltier about this seemingly kind act of generosity than I had ever felt in my life. A fleeting glance at her face was all I took, but it was enough to send my mind into spiralling, desperate turmoil. Only later did I remember how she meekly uttered, "khob khun ka{2}", too tired to say much more. She did not care about who I was or how I felt; I was nothing more than the note in her cup, the next meal. It was at this point that my body reminded me on its need for air. It seemed at first a strange and difficult notion; an action to be considered instead performed automatically. ...read more.

My mother, at the subtle insistence of my father, repressed the urge to wrap her arms around me and console her child. My father understood though, he looked at me with quiet understanding, behind which I could see what I later ascertained to be pride. Pride in the fact that his son had finally cried, had taken a considerable step on his path to manhood and higher level of understanding. Understanding of the "way the world is", humanity and fairness. I did not eat that night, nor did I partake in even a drink of water. Consequently, I did not sleep either, but instead I stayed up all night, desperately trying to make sense of what I saw, my hunger, the only link I felt I shared with the girl though we were both humans. Children. Our lives parallel yet so very far apart. {1}: Wai - Traditional Thai greeting in which palms are pressed together in a prayer like manner {2}: Khob Khun Ka - Thank you ...read more.