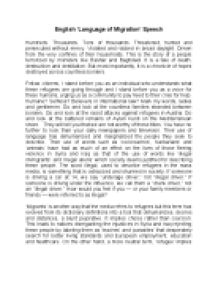 Speech on the Language of Migration Debates

Transfer-Encoding: chunked ﻿English ?Language of Migration? Speech Hundreds. Thousands. Tens of thousands. Threatened, hunted and persecuted without mercy. Violated and robbed in broad daylight. Driven from the very confines of their households. This is the story of a people terrorized by monsters like Bashar and Baghdadi. It is a tale of death, destruction and destitution. But most importantly, it is a chronicle of hopes destroyed across countless borders. Fellow citizens, I stand before you as an individual who understands what these refugees are going through and I stand before you as a voice for these humans, urging us as a community to pay heed to their cries for help. Humane? Selfless? Believers in international law? Mark my words, ladies and gentlemen. Go and look at the countless families stranded between borders. Go and look at the r****t attacks against refugees in Austria. Go and look at the battered remains of Aylan Kurdi on the Mediterranean shore. ...read more.

Another observation to regret is our approach of dismissing the issue by viewing these deprived people as mere ?statistics?. What if you read, for instance, that more than 220,000 Syrians have been killed since the start of the war in their country? That 7.6 million are displaced inside Syria, roaming from town to town, looking for safety? Or that 3.9 million live as refugees in neighbouring countries? These are important numbers. But it is a hard thing to picture millions of faces all at once. Numbers have a way of making them merge, turning them into a blur of human tragedy, a calamity so sprawling, that it undermines our ability to truly see it. It makes us forget that each of those numbers is a man, a woman, a child, a father, a mother, a son and most importantly, a human being. In the words of Rudyard Kipling, ?If history were taught in the form of stories, it would never be forgotten.? As a citizen of this fine country for over 15 years, having first ...read more.

There use of language reflects the climate of intolerance and xenophobia prevalent in society, be it the Foreign Minister claiming ?migrants to be marauding across Europe? or the Prime Minister frightening us with images of a ?swarm? at our borders. And when these words on paper are used by the media, by politicians and by celebrities, they no longer remain words on paper. They affect the real lives of real people in a very real manner. They lead to these people facing persecution, rejection and ostracization in society. At this dark moment in history, time questions us. Is our conscience willing to wake up now? Are we willing to heal the wounds of these anguished refugees? Are we ready to transcend language and refer to these refugees in the simplest, truest and most humane way possible? As HUMANS? Or are we going to continue with this slumber of ignorance? Because at the end of the day, there is the world of creative altruism and then there is the world of destructive selfishness. It?s time we made our choice. ...read more.