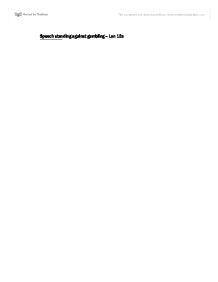 Speech standing against gambling - Lan 12e Gambling! Have you ever thought of it? Have you ever known that such a tiny and simple action could lead to problems that are rather worrying and dangerous? Stealing, robbing, lying, bribing or even killing! That's not yet all of them but we better start thinking now, of how not to have more. There have been thousands and thousands people suffering then and now from the results of gambling. Hundreds of children have been left neglected, without home, care nor education just because their parents have devoted their lives, their time and effort for gambling. More than a thousand of suicidal deaths resulted from gambling. Plenty of businesses and firms went bankrupt whose owners and staffs have involved in gambling. Many students, teenagers or young people at our age have been into serious cases of stealing and robbing or even going to court for committing an offence just to feed their habits of gambling. ...read more.

In one way or another, gambling would easily lead us to an extremely bad lifestyle and disturbing habits such as drinking or smoking. Many gamblers have been living their lives unconsciously, knowing nothing about surrounding things and people. They seem to lose the belief and faith in themselves or even their goals and targets in life. Some even don't know what they are doing after their next bet. How ridiculous! Not just self-effects and personal breaks down, gambling also leads people to devastating failures at work and study, following by massive financial loss and un-efficient output. People's concentration becomes less and less effective everyday since they start to gamble. It sometimes ruins the relationship between peers and working partners owing to the aggression and anger that gamblers might have. Their hobbies of gambling soon become an obsession, then an addiction that their mind is filled with the thought of either losing or winning. The productivity of the output drops down and plummets to lowest level due to poor performances and low effort. ...read more.

You are lucky enough to have such a high standard of education, you are fortunate enough to receive so much care and experiences from you parents. So why waste it all for just a minute being stupid and agree on some ridiculous bet or gamble? Personally, I think gambling is one of the most shaming ways to earn. Being rich and affluent or having everything you want instantly by spending such money is not a life. It is a silly and ludicrous game which you have had yourself flowing with it to an endless point. You can hardly stop and think of how far you have gone! Never! So why not grow up and live with the pride of earning money using your own talents and intelligence? Life gets tough sometimes, that's why nothing is as perfect as you want it to be. There would be times when you feel hopeless, indecisive, confused or even shocked with your pockets empty. Think! Think carefully of what to do but not to gamble because in the end, you will be empty! ...read more.