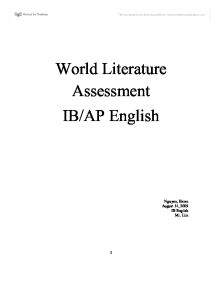 What is the purpose of Gregors metamorphosis?

World Literature Assessment IB/AP English Nguyen, Haian August 14, 2009 IB English Mr. Lim Statement of Intent In this composition, I plan to elucidate the specific purpose of Gregor Samsa's metamorphosis. The Metamorphosis by Frank Kafka strangely opens with a climax of the protagonist named Gregor who suddenly transformed into a verminous creature during his swoon. Many readers cannot help but wonder what this metamorphosis serves in Gregor's life- a life that constitutes of hardships, adversity and misfortunes from all aspects. As an indebted child to his family, Gregor inherits all the responsibilities from his father, mother and sister. He works as a traveler who travels day in and day out yet that is not merely enough exhaustion. He also has to deal with a very tough boss who exasperates him day in and day out. After dissecting the novel, I have come up with several possible interpretations of Gregor's metamorphosis. Perhaps Gregor undergoes such a shocking change to acquire something he has never endowed before, his freedom just like many of us. We live to seek what our hearts desire, what our life's drives motives and seek ourselves. ...read more.

The money Gregor earned each month goes toward the family's expenses. When brought home, it is accepted gratefully but never thankfully because Gregor's family "had simply got used to it" (21) therefore it is an expectation that Gregor must fulfill to satisfy his family. He has always wished to be freed from this adversity. In an attempt to escape reality and find himself elsewhere- perhaps a better place where Gregor can grasp an opportunity to be freed from his family, Gregor fell asleep. Lucky for Gregor, his wish of being freed from the family burden was granted. Thus, when Gregor is unable to work, his family becomes less dependent as they aliened him, leaving Gregor a feeling of being liberated for once. Besides gaining freedom from his family, Gregor additionally seeks to gain freedom from his job that occupies a large portion of his life. According to Gregor's mother, "the boy thinks about nothing but his work" (7). Day by day, Gregor desperately desires to escape from his "exhausting job" (2) of traveling and longs to express his hatred towards his boss. His description of his boss is another factor revealing Gregor's aversion for the chief. ...read more.

However, shortly after his metamorphosis, Gregor had gained a passport to freedom, allowing him to display his true hidden personality. Now, Gregor "feels integrated into human society once again" (?). Ironically, when Gregor started to deteriorate and die, he felt more than a human than he ever did in his entire life because now the burden of responsibilities is lifted off his shoulders. As a result, this metamorphosis bestows Gregor a freedom he has always wanted to as an individual. Change can be perceived as positive or negative consequence. In Gregor's and Daphne's situation, it is a positive consequence- a gift of freedom that both characters seek for. In Metamorphosis by Franz Kafka, Sam Gregor was able to find freedom within his family as the responsible working man, his work as an exhausting traveler and himself as an individual of society. His inability to work allowed him to break free from his horrifying and dreadful job as a traveler. Furthermore, he is now liberated from the burden that his family places on his shoulder. Thus having transformed into a cockroach was an alternative for Gregor to experience the freedom he never had- the freedom of a typical employee, the freedom of an ordinary son and the freedom as a normal human being of society. ?? ?? ?? ?? 1 ...read more.