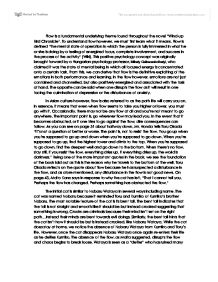 Flow is a fundamental underlying theme found throughout the novel "Wind-up Bird Chronicle". To understand flow however, we must first learn what it means. Flow is defined "the mental state of operation in which the person is fully immersed in what he or she is doing by a feeling of energized focus, complete involvement, and success in the process of the activity" (Wiki). This positive psychology concept was originally brought forward by a Hungarian psychology professor, Mihaly Csikszentmihalyi, who claimed it was the state of mental being in which all focused energy is concentrated onto a certain task. From this, we can derive that flow is the definitive exploiting of the emotions in both performance and learning. In the flow however, emotions are not just contained and channelled, but also positively energized and associated with the task at hand. The opposite can be said when one disrupts the flow as it will result in one facing the culmination of depression or the disturbance of anxiety. ...read more.

When there's no flow, stay still. If you resist the flow, everything dries up. If everything dries up, the world is darkness." Being one of the more important quotes in the book, we see the foundation of the book laid out as this is the reason why he travels to the bottom of the well. Toru Okada reflects on the quote about flow because he has suspected a disturbance in the flow, and as afore mentioned, any disturbance in the flow is not good news. On page 43, Malto Kano says in response to why the cat has left, "That I cannot tell you. Perhaps the flow has changed. Perhaps something has obstructed the flow." The initial cat is similar to Nobaru Wataya in several ways including name. The cat was named Nobaru because it reminded Toru and Kumiko of Kumiko's brother Nobaru. The most notable feature of the cat is its bent tail. ...read more.

The cat that has returned is unlike the original cat in the sense that there is no longer a bend in its tail. This implies that the flow is no longer barred and can once again flow freely. We also notice at this point that once the cat has returned, order has begun to restore itself in Toru Okada's life. Now that the cat has returned into Okada's life, he notices that the tail is no longer bent. As a result, he decides to rename the cat since it was no longer 'crooked' like Nobaru. Instead, the cat represents a new beginning. When Okada learns of his new healing powers, he also heals himself in the sense that he is no longer lonely and depressed like the state he was initially in when Kumiko left. At this point in the novel, Nobaru Wataya no longer exists in Okada's life as he conquered him in his mind and as a result, flow can return. Flow is said to be flowing again and is shown by the flow of water as the well starts to fill up towards the end of the novel. ...read more.