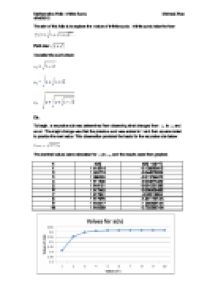 Infinite Surds. The aim of this folio is to explore the nature of infinite surds.

The aim of this folio is to explore the nature of infinite surds. Infinite surds take the form

Consider the surd where:

To begin, a recursive rule was determined from observing what changed from

and so on. The major change was that the previous surd was added to 1 and then square rooted to provide the next value. This observation provided the basis for the recursive rule below.

The decimal values were calculated for

and the results were then graphed.

becomes larger, the function asymptotes towards a certain value. Finding the exact value of the surd requires being able to solve the surd. Solving the surd was done in the following method.

The exact value of the infinite surd

A table of values is composed for values of n in addition to a graph to identify possible asymptotes. 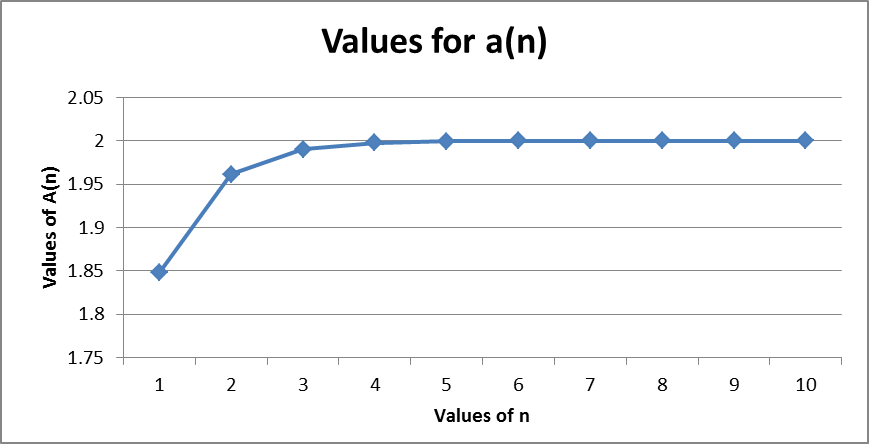 becomes larger. The graph has a very similar shape to the graph in Part One but with a sharper turn and the values for

becomes larger. However, the values are different in that they become more distinct. E.g. the big gaps are bigger, smaller gaps are smaller. To solve, a similar method to the method used in Part one will be used.

The exact value for the infinite surd is 2 where

. These results correspond to the calculated results validating the observation that the infinite surd approached 2 with greater values of

and the integer value of the surd.

which correlates directly to the integer values of the infinite surd. The correlation can be represented by the formula

or with the General expression for Infinite surds.

When put into an excel spread sheet, and tested, the values for

all returned with the matching values for

when substituted into the table of values for

showed values which all approached integers which were the original

values. Examples of these results are shown below.

Infinite Surds and their traits are all closely interconnected with each other. The value of the infinite surd and the value for

in the infinite surd have a unique correlation which means that they can easily be calculated at any time as long as one variable is at hand. In addition, the general expression of an Infinite Surd can be used to calculate the value of any surd effortlessly.