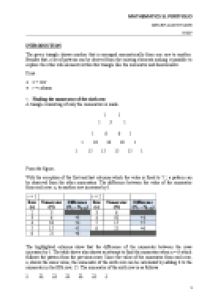 The given triangle shows number that is arranged symmetrically from one row to another. Besides that, a lot of patterns can be derived from the existing elements making it possible to explore the other sub-elements within this triangle like the numerator and denominator.

A triangle consisting of only the numerators is made.

With the exception of the first and last columns which the value is fixed to ‘1’, a pattern can be observed from the other numerators. The difference between the value of the numerator from each row, n, to another row increases by 1.

Following the symmetrical pattern from the previous rows of the triangle, the value of the denominator for the seventh row is:

Thus, the elements (E) of the sixth and seventh rows are:

Explanation on the general statement.

En(r) is the element from nth row and rth column. Every element in the given triangle is in a fraction form and thus, each element is consist of a numerator (N) and a denominator (D) in the form of

for the respective row and column. Thus, the general equation of En(r) must consists of

Finding the general equation of the denominator.

Since the general equation of N is known, now, I only need to find any correlation between the row number, column number and (N – D). This is to make it easier to formulate the general equation of the denominator. After a few trials, the value of (N – D) is actually the result of multiplying the difference between n and r with r, r(n – r). Table below gives a clearer picture of the newly derived equation for (N – D).

The regular patterns shown throughout the triangle allows us to figure out the upcoming rows of the triangle. General equations of the numerator and the denominator are able to derived and thus, makes it easy to calculate the elements in other rows and columns. However, there are still limitations to this general statement. Since the shape that the symmetrical elements form is a triangle, the range of elements that can be calculated is limited to within the shape of the triangle only. For example, catering for n < 0 will no longer follows the triangle shape. All in all, observing patterns that the fractions potray enables us to discover what lies beneath all the numbers.