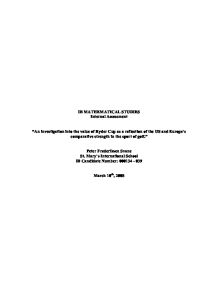 “An investigation into the value of Ryder Cup as a reflection of the US and Europe’s comparative strength in the sport of golf.”

The Ryder Cup takes place every other year in September, and is supposed to determine whether Europe or the US is the best in the sport of golf. Each side is represented by twelve golf players, who get the chance to play against each other over the course of three days. Contrary to regular tournaments, the Ryder Cup is played in a match play format[1] rather than using stroke play[2]. The question therefore arises if the Ryder Cup is a true reflection of which region (US or Europe) has the best group of golfers. Are Europeans really better golfers than Americans, since they have won all the meets since the new millennium? To put a final answer to this debate, the investigation will focus on performances in regular tournaments, in which the Ryder Cup players have all competed, and their performance in the Ryder Cup. Various mathematical processes will be carried out within the scope of relevance in order to reach a conclusion to the mentioned task.

When the same is done with the processed data of the majors, the following results become apparent:

In the time up till the Ryder Cup 2002, Europe performed this amount better than US in the majors:

This number shows how many times worse the US performed than Europe. This number reflects a European win because it is greater than 1.

In the seasons following up to Ryder Cup 2004, Europe performed this amount better than the US in the majors:

The time prior to the most recent Ryder Cup in 2006, the following comparative results between the US and Europe in the majors have been found:

Again, Europe performed worse than the US in the majors by an amount .9932860227. Again, the number’s value less than one reflects a US win. 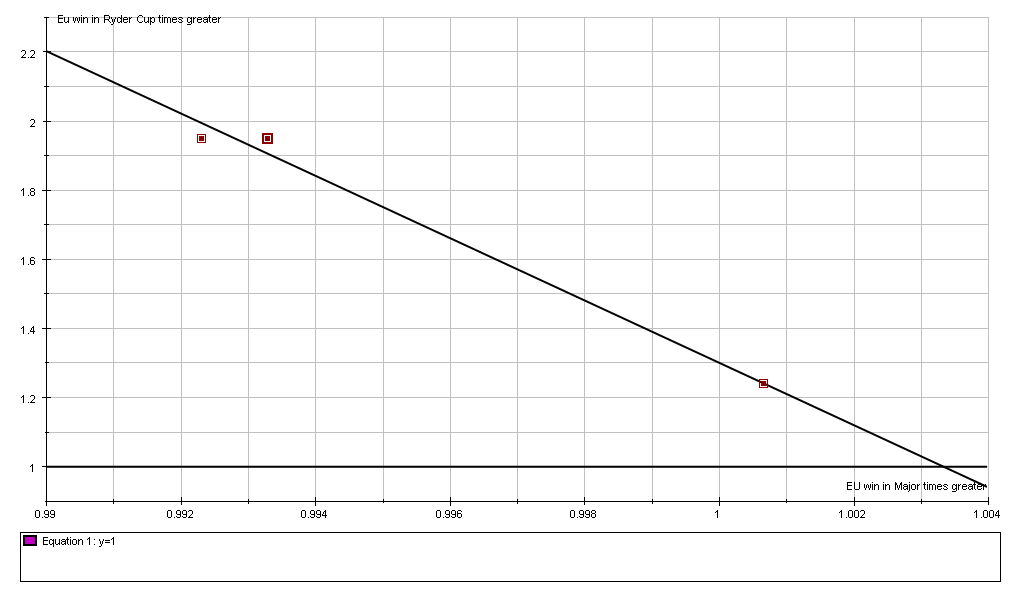 As it appears in the scatter plot with the least square regression line, the greater the European win in the Majors is the smaller their victory in the Ryder Cup is. Hence there is a negative correlation between the two variables. In other words, the better the US performs in the majors (going toward zero on the x-axis, since any value below on represents a US win)

[1]“Play in which the score is reckoned by counting the holes won by each side.” 5th February, 2008: http://dictionary.reference.com/browse/match%20play>

[2]“Golf competition in which the total number of strokes taken is the basis of the score.” 5th February, 2008: http://dictionary.reference.com/browse/stroke%20play