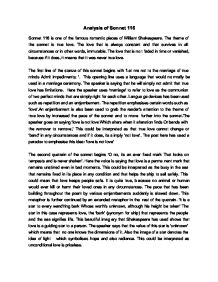 Sonnet 116 is one of the famous romantic pieces of William Shakespeare. The theme of the sonnet is true love. The love that is always constant and that survives in all circumstances or in other words, immutable. The love that is not faded in time or vanished, because if it does, it means that it was never true love.

The first line of the stanza of this sonnet begins with ‘Let me not to the marriage of true minds Admit impediments; ’.  This opening line uses a language that would normally be used in a marriage ceremony. The speaker is saying that he will simply not admit that true love has limitations.  Here the speaker uses ‘marriage’ to refer to love as the communion of two perfect minds that are simply right for each other. Language devices has been used such as repetition and an emjambement. The repetition emphasises certain words such as ‘love’.An enjambement is also been used to grab the reader’s attention to the theme of true love by increased the pace of the sonnet and to move further into the sonnet.The speaker goes on saying ‘love is not love Which alters when it alteration finds Or bends with the remover to remove,’ This could be interpreted as that true love cannot change or ‘bend’ in any circumstances and if it does, its simply ‘not love’. The poet here has used a paradox to emphasise this idea: ‘love is not love’

The second quatrain of the sonnet begins ‘O no, its an ever fixed mark That looks on tempests and is never shaken’. Here the voice is saying that love is a permanent mark that remains unstirred even in bad moments. This could be interpreted as the buoy in the sea that remains fixed in its place in any condition and that helps the ship to sail safely. This could mean that love keeps people safe. It is quite true, because no animal or human would ever kill or harm their loved ones in any circumstances. The pace that has been building throughout the poem by various emjambements suddenly is slowed down. This metaphor is further continued by an extended metaphor in the rest of the quatrain. ‘It is a star to every wand’ring bark Whose worth’s unknown, although his height be taken’ The star in this case represents love, the ‘bark’ (synonym for ship) that represents the people and the sea signifies life. This beautiful imagery that Shakespeare has used shows that love is a guiding star to a person. The speaker says that the value of this star is ‘unknown’ which means that  no one knows the dimensions of it. Also the image of a star denotes the idea of light   which symbolises hope and also radiance. This could be interpreted as unconditional love is priceless.

The final quatrain before the last couplet, commences with ‘ Love’s not Time’s fool, though rosy lips and cheeks Within his bending sickle’s compass come;’ Here the poet  personifies time by capitalising the ‘t’ to show as if Time was Love’s adversary. The voice says that love will not be fooled by time’s changes but ‘rosy lips and cheeks’ do change in time. The voice carries on ‘Love alters not with the his brief hours and weeks But bears out even to the edge of doom’. This means that love doesn’t change in time’s brief hours and weeks but it resists till the end of the world. It is quite interesting the way the poet uses the word ‘brief’ to show the defeat of Time. Then the final couplets end with ‘If this be error and upon me I never writ, nor no man ever loved’. The voice swearing to make solemn statement saying that if he is wrong about what he said then he never wrote anything nor did any man ever loved. The poet uses this technique to somehow ‘give his word’ to the reader.