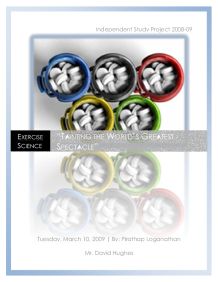 Independent Study Project 2008-09 Tuesday, March 10, 2009 | By: Pirathap Loganathan Mr. David Hughes Imagine a world where all the world's top athletes were on one, even and level playing field. Imagine an Olympics where the spirit of fair play, integrity, and unaided competition between human beings at their peak of natural fitness was genuine and drug-free. The reality of all this is that you cannot. Nowadays, scandals plague the games even before the gun goes off. It hardly raises any eyebrows when a famous athlete dopes. Long gone are the days of Pheidippides running barefoot from the village of Marathon, demonstrating a test of brute human endurance, courage and spirit. It is too late to stop an Olympics fuelled by drugs, so why try? Sport has changed dramatically over the years, and athletes should be allowed to do what is necessary to compete in the modern era. That is why Olympic athletes should be allowed and given the choice to rightfully use performance-enhancing drugs for the reasons of freedom of choice, the untenable distinction between natural and unnatural substances, and a much more even level playing field. Due to freedom of choice, the legalisation of performance-enhancing drugs should be permissible for Olympic athletes to use. ...read more.

Charles Weglius, a British cyclist, was wrongfully banned from the sport because he had his spleen removed following an accident in 1998, and since the spleen removes blood cells, this accounted for the increase in PCV and red blood cell count.7 Finally, sport is sometimes not safe enough for many athletes without drugs. If an athlete suffers from asthma, high blood pressure, or cardiac arrhythmia, competition places tremendous stress on their bodies which raises the likelihood of chronic harm. If an archer requires beta blockers to treat heart disease, should we be worried if it will give him or her an advantage over the other competitors or their health? Or if an anaemic cyclist wants to take EPO, we should rather be concerned with the treatment for anemia.8 If legalised, it removes any uncertainty and controversy. Not to mention the considerable amount of effort to regularly test the competitors and banning those who "failed" them; WADA alone costs around $22 million per year just to test around 15% of the athletes.9 Since there is no way to deem and distinguish what are natural or unnatural substances, they should all be allowed as there is no fine line. Finally, the use of artificial aids and the professional athletes who use them balances out the competition. ...read more.

Nor can we prevent the spectacle of sport from evolving, but we can begin to direct its evolution for the better. Performance-enhancements are by no means against the competitive nature and spirit of the games; it is the spirit of sport. Drugs have been around forever "with early Olympians using extracts of mushrooms and plant seed, strychnine, and even eating live bees or crushed sheep's testicles to gain to gain the slightest advantage".14 One merely has to browse the annals of history to find examples of athletes trying to improve by the tiniest of margins. The drive to perfect performance is too enticing for humankind to resist. As technology continues to advance at a rapid pace, new methods such as gene and blood doping will become harder to detect, and in a few years, they will go quietly unnoticed. And when this happens and the risk of being caught is nil, athletes will choose to cheat at their own will. Drugs are against the rules of sport, but if we redefine the rules and make it legal, there would be no more "cheating". To be human is to choose to be better. For the reasons stated above, Olympics athletes should be allowed and be given the choice to rightfully use performance-enhancing drugs on the basis of freedom of choice, the untenable distinction between natural and unnatural substances, and to level out a much more even playing field. ...read more.