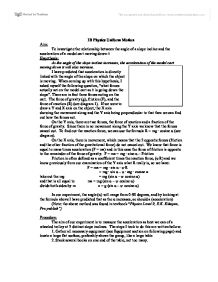 Aim: To investigate the relationship between the angle of a slope incline and the acceleration of a model cart moving down it

As the angle of the slope incline increases, the acceleration of the model cart moving down it will also increase. 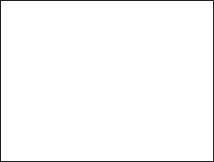 I have predicted that acceleration is directly linked with the angle of the slope on which the object is moving.  When coming up with this hypothesis, I asked myself the following question, “what forces actually act on the model cart as it is going down the slope”. There are in fact three forces acting on the cart.  The force of gravity (g), friction (F), and the force of reaction (R) (see diagram 1).  If we were to draw a Y and X axis on the object, the X axis showing the movement along and the Y axis being perpendicular to that then we can find out how the forces act.

On the Y axis, there are two forces, the force of reaction and a fraction of the force of gravity.  Since there is no movement along the Y axis we know that the forces cancel out.  To find out the reaction force, we can use the formula R = mg ∙ cosine α (see diagram).

On the X axis, there is movement, which means that the 2 opposite forces (friction and the other fraction of the gravitational force) do not cancel out.  We know that force is equal to mass times acceleration (F = ma)

11. Repeat steps 2-10 again so that you have a 2nd trial (this is handy because you can obtain an average result in order to eliminate any errors)

12. Repeat steps 2-11 using more books, this will give the 2nd larger angle

NOTE: if still unsure of what to do, I strongly recommend viewing Diagram 1 (the set up) below.  It should become very clear.

Equipment: Usable protractor, Ticker-tape timer (with necessary wiring), flat long wooden board, non-motorized wooden and wheeled trolley, a pile of books or something with height and stability to rest the wooden board on 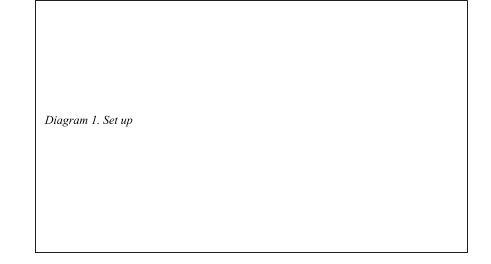 In this experiment I tried to keep all variables constant, with the exception of the angle of the slope which was changed twice.  The distance the cart descends, the surroundings, the cart used and board were all held constant throughout the trials.

I have decided that in order to prove my hypothesis correct, I would need to use at least 3 different angles and use 2 trials for each angle (to ensure validity).  The 3 angles I chose to investigate were 25°, 35°, and 45°.  In order to record the acceleration for each, I would first need to have a complete record of the motion of the trolley.  The dots that would be presented on the ticker-tape would be sufficient enough for me to then calculate the acceleration of the trolley in each case. The following 3 pages contain results of all three ticker-tapes.

If granted another opportunity to repeat this experiment, I would certainly change some things.  First of all I would chose to perform more then only 2 trials for each angle.  I would opt for about 10 trials, then find the average of the 8 best and use that as the final result.  Also I would like to experiment with more then 3 angles.  As hard as it might be, I would like to try a very steep angle, around 70°. Moreover, it would be interesting to see the effect of mass in terms of acceleration.  Perhaps try carts with different weights.  All in all, the experiment was a success.  The small errors did not alter the answers too greatly.  The accelerations of both trials where close enough to each other.  And my hypothesis stood correct.