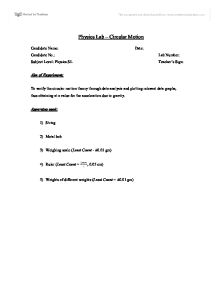 To verify the circular motion theory through data analysis and plotting relevant data graphs, thus obtaining at a value for the acceleration due to gravity. 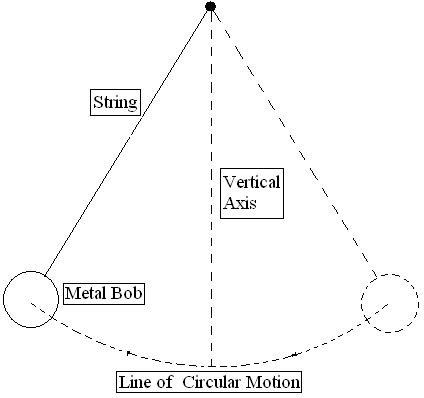 The acceleration of gravity has been proven to be equal to the ratio of:

Thus using this formula, and by the process of data collection and processing, we can prove that the acceleration due to gravity on the surface of the Earth is the same as the considered value of approximately 9.8 ms-2 .

Now, we can take all the time periods to find the Average Time Period, since

Time average = Time periods of all trials ÷ No. of Trials

Thus, using the acquired values, we get the acceleration due to gravity as

Thus through the above experiment we find that the acceleration due to gravity is approximately 10.25 ms-2

As mentioned before, the ideal acceleration due to gravity on the surface of the Earth is considered to be approximately 9.81 ms-2. However, considering the method used above and the surroundings in which it was conducted, the experiment can be called successful.

There are many reasons that would explain the deviation in the value, some of which would be:

If these factors are to be eliminated, the deviation would certainly reduce, making the value more accurate.