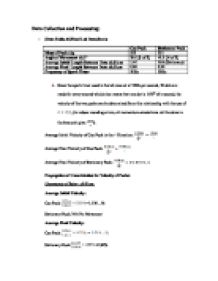 Average Initial Velocity of Cue Puck in the

Propagation of Uncertainties for Velocity of Pucks:

Uncertainty of Mass of Puck: 1.0g:

The Experiment Can Be Summarized By The Following Diagram: 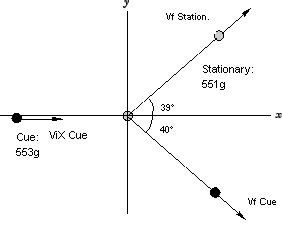 Both the x and y directions needs to be considered in order to solve this question:

If friction in the system can be ignored:

The human errors can be reduced to a minimum if we use a type of a launcher that applies to equivalent strength to the puck which will allow the air puck to travel throughout the surface of the paper with uniform speed, the launch would also eliminate the excess y component and give us a more accurate result.  The surface of the paper can be improved with the use of paper with smoother surfaces; this would produce a better data paper for us to do measurements with. To eliminate the friction at the point of contact, we could use ring magnets with opposite poles around the pucks, this would eliminate the contact of the two pucks and ultimately take friction away. I think we could have done a combination of things better, if I were to design the lab again, I would create a apparatus with a camera mounted on top, which is programmed to take pictures for every time interval along with the improvements I have listed above, the pucks would be placed along the lines of a scale (Meter stick, measuring tape…etc.)  There will also be a spark timer for the physical data. This way we will have a physical and digital data, we can always look back at the digital data (digital data should be more accurate) and compare it with the physical data, this will make the experiment nearly perfect.