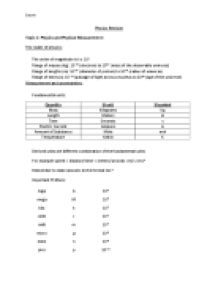 The realm of physics:

Derived units are different combination of the fundamental units

Remember to state answers in the format ms-1

Random errors are errors in measurement caused by different factors

Random errors include the readability of the instrument and the effects of a change in surroundings. Repeated readings do reduce random errors.

Systematic errors are errors due to faulty equipment/calibration.

Individual measurements: the error is ± the smallest value e.g. .5mm

When we take repeated measurements and find an average, we can find the uncertainty by finding the difference between the average and the measurement that is furthest from the average.

A precise experiment is one with a small random error, i.e. the more significant figures the more precise.

An accurate experiment is one with a small systematic error, i.e. the nearer the real value the more accurate.

Give answers to the same amount of significant figures as the least precise value used.

The absolute uncertainty is 1m

For addition and subtraction, the absolute uncertainties can be added

Magnitude force on a current: Magnitude of the electric field: (B) = F/ILsin(O)

Sin (O) = sin of the angle between the field and current

Magnetic Force on a Moving Charge:

Rutherford Model of the atom: the atom consists of a small dense positive nucleus, surrounded by electrons that orbit the nucleus (as planets orbit the sun) as result of electrostatic attraction between the electrons and the nucleus.

Evidence supporting the nuclear model of the atom:

One limitation of the simple model of the nuclear atom:

Did not explain why electrons surrounding the nucleus were not drawn into the nucleus by strong electrostatic attractions to the protons of the nucleus.

Did not specify composition of nucleus.

How did protons in the nucleus stay closely bound when electrostatic forces should have forced them apart?

Emission Spectra: the spectrum of light emitted by an element

Evidence for the existence of atomic energy levels:

The emission spectra of each element is unique as electrons can only occupy specific energy levels.

Movement between energy levels requires electron to emit or absorb energy. Energy emitted or absorbed is in the form of packets of light called photons. E=hf (Energy of a photon = Planck’s constant*frequency of light in Hz).

If laser light is shone through a grating on to a screen, you will see just how sharp and spaced out are the maxima

Measuring the line spacing and the distance of the screen from the laser, the wavelength of the laser can be measured.

G.6.1: Explain the production of interference fringes by a thin air wedge

When the monochromatic light strikes the glass plate some of it will be reflected down onto the wedge.

Some of the light reflected from the wedge will be transmitted through the glass plate to the travelling microscope.

A system of equally spaced parallel fringes (fringes of equal thickness) is observed.

The travelling microscope enables the fringe spacing to be measured. The fringes can also be observed by the naked eye

Explain how wedge fringes can be used to measure very small separations.

Applications include measurement of the thickness of the tear film on the eye and oil slicks.

Describe how thin-film interference is used to test optical flats

Wedge films can be used to test optical surfaces for flatness.

If a wedge is made of two surfaces one of which is perfectly plane but the other has irregularities, the observed fringe pattern will be irregular in shape. The irregular surface can then be re‐polished until the fringes are all completely parallel and of equal thickness

State the condition for light to undergo either a phase change of π, or no phase change, on reflection from an interface